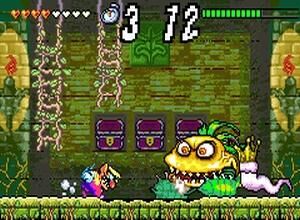 Cractus is the boss of the Emerald Passage in Wario Land 4. He is a giant, undead, venus-fly trap-like monster that has been planted in a vase and rather adamantly refuses to leave said vase.

When Wario enters his room, Cractus is still asleep; however, he immediately awakens when Wario smashes his (Cractus') vase, also causing said plant beast to suddenly begin hovering around said room while attacking Wario with his thorny hands and drooling out "evil" saliva that transforms Wario into a zombie if he makes contact with it. Once Cractus has been defeated, he vanishes in a cloud of smoke, leaving behind a large golden crown.

Retrieved from "https://villains.fandom.com/wiki/Cractus?oldid=3666440"
Community content is available under CC-BY-SA unless otherwise noted.