Servant of Neo Arcadia
Commander of the Einherjar Eight Warriors

Hanging out with Niege (formerly).

Craft (in Japanese: クラフト, Kurafuto) is the secondary antagonist of Mega Man Zero 4. He is the top minion of Dr. Weil as well being the Commander of the Einherjar Eight Warriors of Neo Arcadia with the task of destroying Area Zero.

Before Weil's rise, Craft protected Area Zero and had a romance with a human called Niege, however, after Weil rose Craft decided to serve him because he preferred reason before honor.

After Zero made his way through the enemies from Area Zero, he saw Popla Cocapetri and thought it was another crook, when in reality, it was one of the Einherjar Eight Warriors. Popla and the others were reunited there and every one of them planned on killing him, until Craft came and ordered to not attack Zero, he reveals that Dr. Weil wants to destroy the nature in Area Zero.

After confronting Craft he decides to take Niege away, without knowing the reason at first, he then discovers that Craft was working for Weil to find and protect Niege from Weil and didn't want her to get hurt, since he knows Ragnarok is a very dangerous weapon, until Weil comes in and offers Niege and Zero to join him, which Niege instantly regrets and says "I'd rather choose to laugh death in the face and face it with dignity". After Zero and Niege escape, Craft meditates about Niege's words.

After Zero gets closer to Neo Arcadia, suddenly the resistance noticed that Ragnarok was activated and ready to shoot, but instead of pointing to Area Zero, it was towards Neo Arcadia, exactly where Dr. Weil was.

The whole resistance went to search for any injured humans in Neo Arcadia, while Zero went to search about who was controlling Ragnarok. it was Craft who shot the weapon after all, he wanted Weil dead once and for all, Zero asked him if that's a action that Niege would approve, Kraft does not care, he just wanted to destroy Weil without thinking of the lives he had to retire, Zero had no choice but to destroy him.

Before dying, Craft wants to know about what makes Zero trust humans and other reploids, to what he answered he has promises with a old friend, X namely, so he trust him and so, the humans that X trusts, Craft understood these words and admitted responsibility for his massacre.

Just before going defunct, Craft does a last request for Zero, he wants him to protect Niege and the humans and leave his corpse there to not make Niege suffer more. 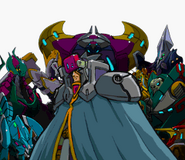