Legends of Chima: The Animated Series

Collecting CHI and revolting against the Lion Tribe

Control all of the CHI in Chima

Cragger is one of the secondary antagonists in Legends of Chima: The Animated Series and the leader of the Crocodile Tribe.

He was once (and now again) best friends with the Lion Tribe leader Laval but turned on him after getting hypnotized by his sister who serves the main antagonist, Crooler. Cragger also blames Laval for the disappearance of his parents; Crominus the former Crocodile Tribe leader and Crunket. In the end, he reforms and joins the good guys, then becomes best friends with Laval again.

Cragger has dark green on the top of his head with a lighter navy-green color on his lower jaw. He has a scar on his right eye which is also sightless since it was scarred. Cragger wears a royal red colored cape with CHI armor like that of his father Crominus. In the Legends of Chima TV series, Cragger has red on the ridges of his head unlike his Minifigure and sharp jagged teeth.

The Legend of Chima

Cragger is seen with Laval before they became enemies, talking with Laval and hopping on Laval's back. He later sneaks into the Lion CHI Temple to get a CHI orb from the Sacred Pool of CHI. However, he is caught by Laval and promises that he will never steal any of the CHI again. However, Cragger breaks that promise and returns to the Lion CHI Temple to steal the CHI again. However, his theft is reported to his father Crominus by Lagravis and they later meet at the temple which leads to a war between the Lion Tribe and the Crocodile Tribe. When he finds out that his parents, Crominus and Crunket, had fallen down a cliff and are trapped in their vehicle, Crooler controls his mind with a flower; encouraging him to become the leader of the Crocodile Tribe and destroy the Lion Tribe.

Cragger joins forces with Worriz and the Wolf Tribe and orders them to attack the Lion CHI Temple. Just as Laval is about to use his CHI, he drops it due to the rumbling of the Crocodile Tribe and Wolf Tribe forces attacking the temple and Cragger steals the CHI orb while wearing his father's golden helmet. Laval later removes the helmet to find that it is Cragger who stole his CHI. Cragger later starts a Speedorz fight with Laval, whom he now blames for the disappearance of his parents and throws Laval into some water hoping that he is dead and returns to the Lion CHI Temple to steal the CHI. However, Laval is rescued by the Lion Legend and returns to the temple to ward of Cragger and his forces. 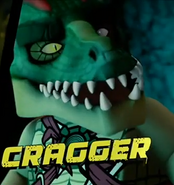 Cragger in Legends of Chima: The Animated Series. 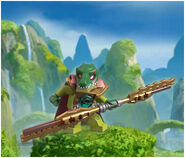 Cragger with his sister Crooler.

Cragger fighting General Scolder.
Add a photo to this gallery
Retrieved from "https://villains.fandom.com/wiki/Cragger?oldid=4210132"
Community content is available under CC-BY-SA unless otherwise noted.