Aiding and helping Director Dewey with his nefarious purposes.

Help Dewey kill Jason Bourne and anyone else deemed as a threat to the Iron Hand Program (failed).

Craig Jeffers is a major antagonist in Jason Bourne, the fifth installment of the Bourne movie series. He is a high ranking CIA agent and the right-hand man of the agency's supreme director Robert Dewey.

He was portrayed by Ato Essandoh.

Little is known about Jeffers other than that he is a CIA agent.

In 2016, Jeffers assists Dewey as a CIA hacking orchestrated by a woman named Nicolette "Nicky" Parsons happened. In retaliation, Dewey orders a manhunt for Parsons and ordered Jason Bourne to be killed. When CIA teams failed to apprehend and kill them, Dewey planted The Asset to assassinate them both. However a vehicular chase across Athens, Parsons was shot dead but Bourne escaped with the keys to a safe deposit box with CIA files and a hard drive Parsons threw at him before she was killed.

Jeffers is later present when Lee walked in and as explained her plan to Dewey: Contact Bourne under the belief that she could persuade him back into the CIA as an agent. Dewey seemingly accepts with glee and Lee leaves the room. Jeffers is the only one left with Dewey and they begin to discuss their true intentions. Jeffers later is present during a presentation in which the Asset tries to assassinate Lee and a businessman named Aaron Kalloor.

While Bourne is confronting Dewey afterwards, Jeffers rushes in the room and attempts to rescue Dewey and knocks down Bourne but is shot dead by him. Dewey would then be killed by Lee when she rushes in to save Bourne, who goes on to proceed in killing the Asset to undo Dewey's plan. It is likely that Jeffers' involvement is exposed when Lee discuss Dewey's methods with Edwin Russell, the Director of National Intelligence. 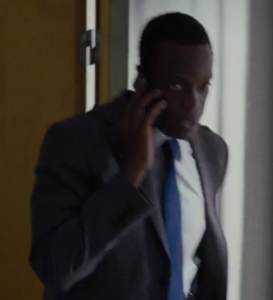 Retrieved from "https://villains.fandom.com/wiki/Craig_Jeffers?oldid=4196809"
Community content is available under CC-BY-SA unless otherwise noted.