Cranberry is a humanoid alien who bears a resemblance to Namole and Fisshi, sporting the same hairdo as them. His dressings resembles those of Raspberry.

As expected of a former Frieza Force soldier, Cranberry is a very selfish and egotistical being. However, he is a rather smart and experienced fighter, since Frieza's Generals chose him to invade Namek with them. He sees that as a matter to pride upon and falsely claims that he was formerly an elite member of the Frieza Force. He decided to work alongside Moro due to him assisting Cranberry in escaping the Galactic Patrol Prison and slightly out of fear of Moro's immense power. He seems to consider the Saiyans a "strong bunch" and is able to tell Goku is one of them. In the end, he displays no loyalty towards Moro, as when he gathered the seven Namekian Dragon Balls, his first wish was to recover his strength, and he was also prepared to make a second wish for himself, but before he could do that, Moro contacted telepathically and assured Cranberry if he betrayed him, he would hunt him across the universe. Because of this, he reluctantly made the second wish to restore Moro to full power, but with his third wish, he was about to wish to be transported to an area where no one, not even Moro could find him, but before he finished, Moro killed him due to having a third wish of his own.

Having been told of the Dragon Balls on Namek by him, Moro sets Cranberry free as he escapes and has him pilot a ship to New Namek.

Cranberry is terrified to see Vegeta on New Namek, and is shocked to see he joined the Galactic Patrol; he is also afraid of his transformation abilities into the Super Saiyan and Super Saiyan God forms.

Cranberry assists Moro in collecting the Namekian Dragon Balls and is gravely wounded during the battle against the Namekians whom he killed using his arm canon (including elder Moori), so when Porunga is summoned, he uses the first wish to heal his wounds. Moro instructs him to use the second wish to completely restore Moro's magical abilities to their prime. Cranberry then decides to use the third wish to transport himself to a remote planet where neither Moro nor the Frieza Force nor the Galactic Patrol could track him down, though Moro impales him before he can do so, finding no further use for Cranberry and stopping him from using the third wish for himself when he had his own wish he wanted granted, which entailed freeing all the other prisoners. 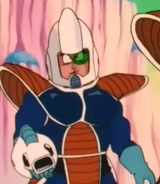 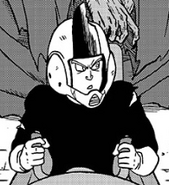 Cranberry kills Moori.
Add a photo to this gallery

Retrieved from "https://villains.fandom.com/wiki/Cranberry?oldid=3385390"
Community content is available under CC-BY-SA unless otherwise noted.