Craniac is an antagonist who appeared in TMNT Adventures, during the "Dreamland" arc.

Craniac is a yellow alien with a warthog-like face with several spike-like portrusions at the bottom, sharp teeth, and four-digit hands and feet who dresses primarily in green with red and gold cuffs, a black belt with a gold buckle, and a gold turtleneck.

Craniac primary weapon is a sword.

Craniac first appears in silhouette asking Verminator-X, who had incapicitated Michelangelo, to come as he had made preparations for the duo.

He later shows Verminator a comet that will destroy the Earth after it travels around the sun. Verminator expresses concern regarding the comet, but Craniac shows himself to be apathetic towards this situation as he has no desire to save Earth. He came to Earth in the name of profit.

He explains to Verminator that an alien race incapable of dreaming has hired him to collect brains so that the aliens can tap into the memories within. After the turtles witness Hitler shoot himself to death, they are confronted by Verminator-X and Craniac who were after Hitler’s brain.

Craniac also shows that he captured several of Leonardo’s students, intending to steal their brains. He pushes Leonardo back with his palm when the latter demands him to release the students. Verminator then tells Craniac they must blow the joint after they have come what they were after. Craniac explains that he would collect a few more select brains so he can be through with Earth before he and Verminator flee in his ship.

Craniac studies the brains he collected and is intrigued by how viable and resilient they were. He is rather excited that this will bring him a huge profit once it mends fully. He then asks Verminator about the status of his project. Verminator explains that he must steal a few ship parts from Nasa for safety. Craniac immediately reminds him about the comet that is intending to destroy the Earth.

When Mike & Raph, Ninjara, and Leo’s students seek out the duo, they come across a group of zombies that attack, forcing the heroes to fight back against them. Around this time, Leo & Don investigate another building and find dozens of brains they were forced to fight back against. During this, Craniac and Verminator watch as both fights move on.

When Mike decapitates a zombie, he realises something is off. After the zombies were slain, Raphael was forced to aim the high tech bo staff at a wall when a beam was about to fire out of it. This ends up draining the liquid that enabled the brains to attack Leo and Don, killing the attackers of the latter two.

This leads to Verminator getting mad at him for violating their agreement not to harvest brains from living creatures. In response, Crainiac tells Verminator and the heroes that he will  leave them to die on Earth at the hands of the asteroid before flying off the planet. 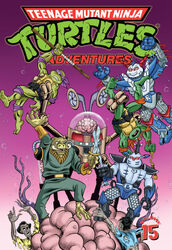 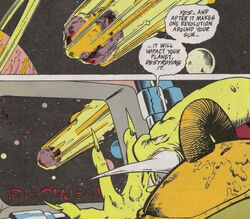