Crankcase is a supporting antagonist of the 2011 film Transformers: Dark of the Moon. He is a member of the elite Dreads (the Decepticons' top infiltration and assassination team) and is specialized with hacking, data theft and destructive sabotage of viral systems.

After Megatron's plan to have Sentinel Prime retrieved by Autobots & revived on Earth a success, he sends the Dreads to retrieve him.

After Sam Witwicky found out about the Decepticon's plans from veteran cosmonauts, he immediately warned the Autobots & formed a convoy to ensure Sentinel's safety & return to Autobot headquarters. Crankcase, alongside Crowbar and Hatchet, pursued them while disguised as a government emergency van.

After Crowbar reveals himself after he threw former Agent Simmons off his limousine, Crankcase & Hatchet transformed & attacked the Autobot convoy to get Sentinel, only to fail as Bumblebee & Dino/Mirage beat Hatchet on the highway. Crankcase and Crowbar continued the pursuit, before confronting Ironhide, who stopped them in a head-on collision.

Faced by Ironhide's heavy weapons & Sideswipe, whom ordered them to bring down their weapons. Crankcase & Crowbar dropped their weapons alongside with the said Autobots, before Crowbar performed a sneak attack on the veteran Autobot by throwing spiked spears at them, only to be killed by the latter.

Crankcase tried to do the same on Sideswipe, only to be knocked by the latter & fatally injured when Ironhide forced his partner's spear onto him & slammed on an abandoned car & kicked the wreckage on a nearby auto shop, exploding & killing Crankcase. 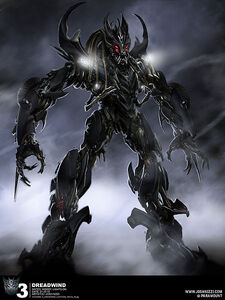 Crankcase's death
Add a photo to this gallery 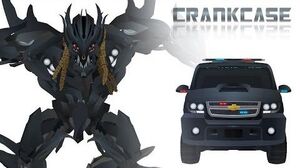 Retrieved from "https://villains.fandom.com/wiki/Crankcase?oldid=3534991"
Community content is available under CC-BY-SA unless otherwise noted.