Cranks are zombified and skeletal-looking humans: they have a lame walk, twisted body limbs, veins sticking out all over their bodies. They're also very fast.

Once infected with the Flare, the victim adopts extremely aggressive, violent and savage behavior. It does not remember who it is or who it knows, including its relatives, which is proven when the infected Newt nearly killed Thomas, his best friend. The objective of the Cranks is to devour any living being they come across in order to survive. They also don't feel any pain and recover quickly from hitting or injuring, which is an advantage in a fight.

Although no Cranks appear in action, a video clip shows one, revealing the severe effects of the Flare virus.

At the very start of the film, Cranks attack the WCKD compound and some are killed by soldiers, while Thomas and his friends are escorted to safety inside.

Later, these ones go into a mall where they are attacked by several Cranks who kill Jack (in a deleted scene) and infect Winston by scratching his stomach. They chase them out of the building, but leave as the group manages to find a hiding place.

When Thomas and Brenda search for passage through underground tunnels, they come across Cranks, in the last stage of infection, stuck in roots and devouring a rat in front of their horrified eyes. The zombies then notice the duo and pursue them among the rubble of buildings. They attack them on a bay window above the ravine and infect Brenda before falling to their death.

WWhile Minho was captured by WCKD at the end of the second film, Thomas, Newt, and Frypan set off on a rover to save him. They take a road tunnel where they find Cranks and the vehicle crashes during the chase. As they try to escape on foot, they are trapped on both sides of the tunnel. Brenda and Jorge then arrive in their vehicle in time, shoot the monsters and leave the tunnel with Thomas and his friends.

At the end of the film, and after the fall of WCKD, it is not known what happened to the Cranks all over the planet.

A Crank in a recording in The Maze Runner. 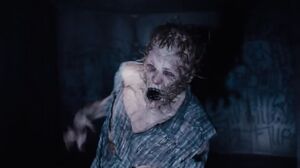 A Crank in The Scorch Trials. 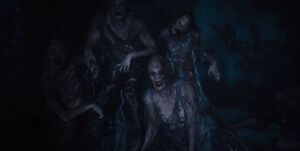 A group of Cranks in The Scorch Trials.

A group of Cranks in The Death Cure.
Add a photo to this gallery

Retrieved from "https://villains.fandom.com/wiki/Cranks?oldid=4308146"
Community content is available under CC-BY-SA unless otherwise noted.