Crash and the Creeps are Power Ranger-like musical monsters who initially took a human form and brainwashed people with their hit song "Confusion".

In their first fight as monsters, they ran. They had tool like weapons. Crash while in human form, got into trouble with Divatox on the Space Base.

This is also when they receive a team blaster powered by a jewel on a chain. It was called the Ranger Scrambler. They also got Power Weapons, similar to the Rangers, but that was off scene.

They then setup for a concert with help of the Piranhatrons. The band was in human form, confusing the rangers.

Crash then sheds his human form, revealing his true monster form. The Band starts playing their song, It disabled both the Rangers and even the Piranhatrons. The rangers then find that if they destroy the Instruments, the Song's spell effects faded. The Creeps then transform off screen and teleport to the beach.

The Creeps used their new Ranger-like weapons to damage, and gather the enemies together so they could use the Ranger Scrambler.

The first shot did massive damage, but while they were reloading, the Rangers called on Turbo R.A.M. in Blaster Mode.

It over powered the Ranger Scrambler, and in the blast the Creeps were destroyed. Crash grew, but was defeated by Turbo Megazord's Spin-out. 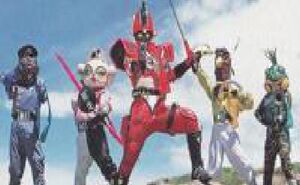 Crash and Creeps with their weapons 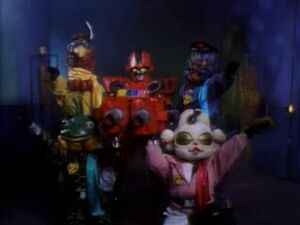 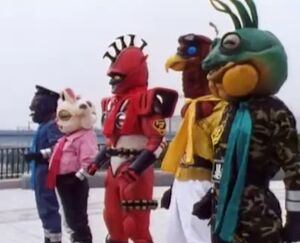 Retrieved from "https://villains.fandom.com/wiki/Crash_%26_the_Creeps?oldid=3405831"
Community content is available under CC-BY-SA unless otherwise noted.