Crash Man (known as Clash Man in Japan) is one of the eight Robot Masters in Mega Man 2, where he appears as a boss. Crash Man has orange armor and has cannons on his arms, allowing him to launch his special weapon, the Crash Bomber. These explosives drill into their target to score an easy hit, then explode, damaging the target if they are not removed in time.

Built by Dr. Wily using Guts Man and Bomb Man as a basis, and given two machines that fire explosives known as Crash Bombers, a tough shell to be resistant to explosions, Crash Man is an honest figure and abides by his commander's wishes. Clumsy without arms, Crash Man is also rather moody, being peaceful one moment and aggressive the next. He likes to wreck buildings, but doesn't care for recycling.

Crash Man runs back and forth during a battle. Whenever Mega Man tries to attack, Crash Man will respond by jumping and shooting his Crash Bombers. The explosives will attach to wherever Mega Man is standing and they will explode. By running, jumping and then shooting, Mega Man will likely inflict damage onto Crash Man. Air Man's weapon, the Air Shooter, is the most effective attack against Crash Man.

Crash Man returns in Mega Man 3. His tactics and weapons are borrowed by one of Wily's Doc Robots. Unlike in Mega Man 2, Crash Man's attacks are stronger and they cover a wider amount of space. The Hard Knuckle and Top Spin are the most effective weapons to be used as counter-attacks. When the Doc Robot is defeated, Crash Man doesn't appear again.

Crash Man appears as a support spirit in Super Smash Bros. Ultimate that makes the fighter start the battle equipped with a Bomber. His spirit battle is a stamina battle against three orange Mega Man that prioritize using their side special (Crash Bomber) that deals extra damage.

Crash-Man makes his only cartoon appearance in Mega-Pinocchio, which has him use time bombs for his main weapon. He speaks in a vaguely Italian-sounding tone. His voice actor is Terry Klassen. 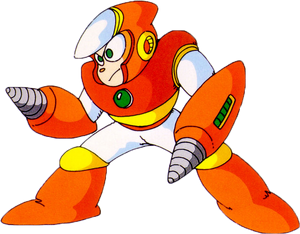 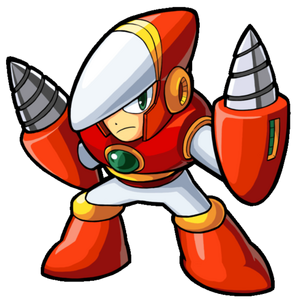 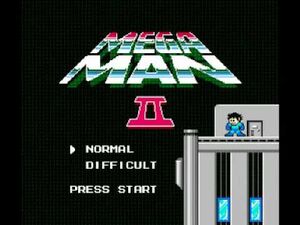