Prisoner (until his death)

Escape with his share of the stolen money (failed).

Perverted Thief
Crawford is a minor antagonist in Wrong Turn 3: Left For Dead.

He was portrayed by Jake Curran.

Nothing is known about Crawford's life other than he was caught stealing cars and was sent to prison for it.

Crawford is first seen in a prisoner lineup along with Floyd, antagonizing a man named Brandon about a murder he was wrongfully convicted for.

After surviving the prison bus crash caused by Three Finger and his nephew Three Toe, he follows the group wanting freedom along with the other prisoners.

Alex, a survivor of a previous attack by Three Finger, meets up with the group begging for help and after Floyd nearly rapes her, Crawford harasses her by telling her what he'd do to her sexually.

Later on, when the group finds Three Finger's truck that's seemingly abandoned, Chavez tells him to go and hot-wire the car. While Crawford brags about being able to hot-wire any car he wants to, he's suddenly ensnared by a barbed wire net trap and dragged along the road by Three Finger until he's dead.

Crawford's share of the stolen money is then taken by the remaining prisoners. 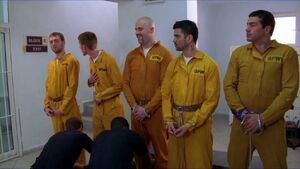 Crawford in the lineup antagonizing Brandon 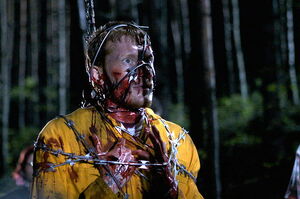 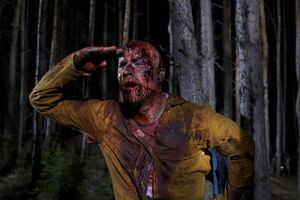 Jake Curran behind the scenes
Add a photo to this gallery

Retrieved from "https://villains.fandom.com/wiki/Crawford_(Wrong_Turn_3)?oldid=4161638"
Community content is available under CC-BY-SA unless otherwise noted.