Chairman of the Magic Council (formerly)

Crawford Seam (クロフォード・シーム Kurofōdo Shīmu) is an antagonist of the anime/manga series Fairy Tail. He was the former Chairman of the Magic Council. He was forced to leave the council after the misuse of the Etherion during the Tower of Heaven incident. He was revealed to be a secret informant of Tartaros, until he is killed to break the last seal on Face.

He is voiced by Masafumi Kimura in the Japanese version, and by Bradley Campbell and Bill Brooks in the English version.

Crawford is a very broad, tall man with a large bushy beard; the beard is knotted into a bun on either side. He features a snub nose moderately sized droopy eyes, high eyebrows and relatively small ears. Crawford also sports a small bun atop his nearly bald head; for attire, Crawford wears a black undershirt and a robe that he keeps tied tightly shut. Atop this robe, Crawford wears a dark-cuffed coat that has diamond patterns decorating the outer edges. Over this coat, the ex-Council member drapes a dark cape of sorts over his shoulders that has a spade (with a dot underneath) decorating both shoulders; around his right wrist, Crawford wears a small beaded wristband. The large man also wears dark pants and light-colored slippers.

At first, Crawford comes off as a rather frank, gratuitous, apologetic and herb-loving old man, having adopted a hobby of cultivating herbs after his forced retirement. However, his true colors are that of a manipulative, back-stabbing man who will do anything for his true affiliates: Tartaros.

Crawford is present at the Magic Council meeting where the matter of Fairy Tail is addressed.

The Magic Council has another meeting after Lullaby is defeated and captured by Fairy Tail. Crawford is silent when Siegrain and Ultear remind the council Fairy Tail ended up saving the day.

Crawford is present when Erza Scarlet is brought before the council. He is surprised when Natsu Dragneel storms into the meeting disguised as Erza, but nonetheless he decided to put both of them in jail for Natsu's damage of the council room.

During Makarov's hearing after the war with Phantom Lord, Makarov falls asleep. This surprised Crawford and makes most of the councilors angry although some members simply laugh.

Pouring Erza and Mirajane some chamomile tea at his house, Crawford tells the two that he took up the hobby of herb cultivation after retiring and that he grew the chamomile himself; he tells them that it's called "the apple of the Earth". After their brief comments, Crawford frankly asks them how they obtained his address since it's supposed to be top-secret, to which he is told that under the current circumstances surrounding them, they, Fairy Tail, used the Council's extensive information network, a fact that he finds reassuring as it his address was found via legitimate means. Upon hearing Erza apologize, Crawford laughs the situation off, telling her that he's not going to do anything to her due to his retirement; still smiling, he audibly recalls the day he met Erza: at her trial. Calling their meeting nostalgic, Crawford then asks them if they were frozen in time shortly after that.

His question, however, is overlooked and he is asked by Mirajane to focus on the matter at hand. Recognizing that Face is the issue, Crawford acknowledges his sadness at the death of his comrades and expresses joy at the fact that upstanding guilds have taken the place of the Magic Council in their absence. Unfortunately, when asked where Face is, Crawford tells them that he doesn't know, as he was not exactly privy to such top-secret information; it was kept under wraps by those even higher up than him. Even when asked who the three Council members that sealed Face were, Crawford tells them that because Face isn't a weapon that is supposed to exist, he doesn't know, and that those who were chosen don't even know that they, themselves, were chosen. At that very moment, however, their conversation is cut short by the arrival of a multitude of Tartaros minions. As Erza and Mirajane prepare to battle them, Crawford is instructed to take shelter in the back room. Later, after the battle between the Fairy Tail women and Tartaros comes to a close, Crawford watches from afar as the women collapse, completely asleep. Revealing to have drugged their tea, Crawford gleefully snatches up the two women and reports back to Kyôka, telling her that he has obtained two bodies and that their plans need to be changed.

Crawford then travels to Tartaros headquarters and delivers Mirajane and Erza to Kyôka; he later walks down the corridors with Franmalth, expressing his anger at the destruction of his house and the loss of his money on Tartaros' operation. Franmalth, however, quells the ex-chairman's anger by telling him that he'll make much more money than he lost after their objective is completed, causing Crawford to smile and state that if Franmalth's words are true, then the loss of his home is a small price to pay. Upon being told that Mirajane and Erza are being tortured, Crawford tells Franmalth to ensure their deaths, as they'll tell everyone of his involvement if they go free. However, in the distance, Crawford sees Natsu Dragneel fast approaching and immediately panics, questions Franmalth as to how he found their base, as he just prior stated that nobody could; bursting through the walls, Natsu punches Crawford in the face, both knocking out his false teeth and the man himself.

Later on, Crawford, utilizing his Super Archive, tries to locate Jellal whilst silencing Franmalth; he tells Franmalth that his Real Time Link is searching through the continent's Mages and that he will definitely find the man for him. A short while later, Crawford becomes bewildered and tells Franmalth to quiet himself, as he is trying to assess the situation; smirking at Franmalth, Crawford states that he's done more than acquire Jellal's location.

Exiting the area, Crawford is pestered about whether he found Jellal and replies by stating that he has achieved something better by transferring the key to Face via his Magic. Explaining that this means that Jellal's key has become his key, he states that they can now transfer it to another person and activate Face by killing them. Suggesting that they transfer the key to one of their captives, he is again asked if he is now the key to Face, which he affirms, noting that now they can use Face and take over the world. Franmalth is surprised that the key to the seal was able to be transferred so easily, but Crawford merely replies that as the ex-chairman, he is able to do so. Gleeful over his success, Crawford fails to notice Kyôka approaching from behind, resulting in him being stabbed through the back. As she asks if the seal is now broken, Crawford begins coughing up blood before collapsing to the floor. As he lays motionless and bleeds out, Kyôka notes that the seal on Face has been released.

After being revived by Keyes' Necromancer, Crawford tries to remotely set off over 3,000 Faces inside the Cube's control room. Later when Erza, Minerva and the four Exceeds find him, it is revealed that Crawford's corpse is controlled by Seilah's Macro after Keyes' death and successfully activates all Face bombs ready to set off right after Mirajane knocks the Etherious out. Crawford's corpse then lies on the ground during the ensuing chaos of Erza and Kyôka's fight.

Super Archive: A rare type of Magic which allows Crawford to store vast amounts of data away to use to his advantage and to transfer information to and from people for various purposes. With this, he is capable of efficiently locating in real time everyone and even know their present conditions. 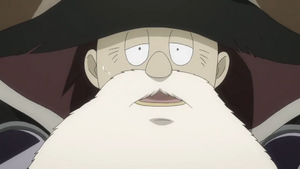 Crawford when he was The Chairman. 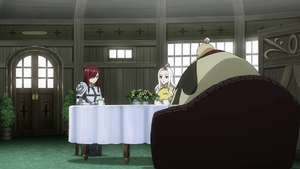 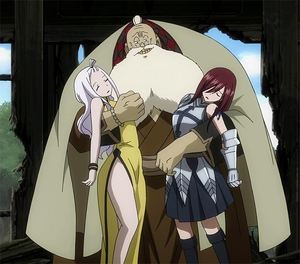