Villains Wiki
Register
Don't have an account?
Sign In
Advertisement
in: Mature, Male, The Walking Dead Villains,
and 28 more

Torture and raping his prisoners.

The "Crazed Man" is the overarching antagonist of the first quarter of the first half of the fifth season in AMC's The Walking Dead. He was a survivor and leader of a unnamed hostile group that raped, tortured and kill their victims. After the Terminus residents escaped, they killed the bandits and took the man as their prisoner as punishment for his actions.

He was portrayed by Owen Harn.

Following the apocalypse, the man became the leader of a group of bandits who were murders and rapists that took over Terminus. They killed some of the residents and imprisoned those that were not killed in train carts. The bandits also raped many of the imprisoned women. However, the residents of Terminus were able to escape from the train carts and fought back against the bandits and retaking their sanctuary. While they did kill the rest of the bandits, the man was imprisoned in one of the train carts as revenge for his atrocities. At some point, he became insane during his imprisonment.

During the attack and escaped from the cannibals, when Glenn Rhee opens the train car's door to help those that were imprisoned by Gareth and his people, the man freed from the car and runs to Rick saying "We're the same" repeatedly. Confused about the man, Rick pushes him away and walker appears and bites the man on the neck. Glenn quickly uses his metal bat to kill the walker and the man to prevent him from reanimating. 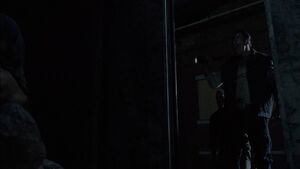 The man opening the train cart. 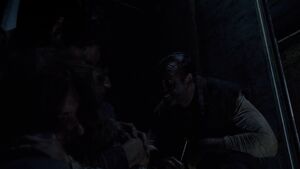 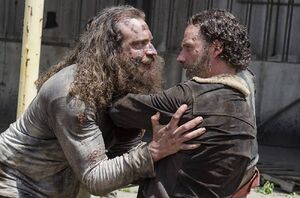 The man free from his imprisonment. 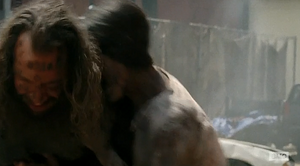 The man being bit by a Walker. 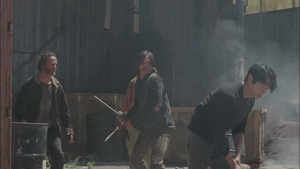 Glenn killing the man and the Walker.