House of the Blue Leaves

Kill the Bride/Black Mamba (both failed).

The Crazy 88 are supporting antagonists of the 2003 film Kill Bill: Volume 1. They are a group of Yakuza assassins founded by it's queenpin O-Ren Ishii, whose top enforcer Johnny Mo leads the army for O-Ren Ishii. In the film, they all fight the Bride (also known as Beatrix Kiddo) as she attempts to kill their leader as revenge for her involvement in the Bride's own assassination; with O-Ren Ishii having partaken in the incident with the Deadly Viper Assassination Squad on behalf of their gangland boss Bill.

Most of the Crazy 88 members have died whilst some others survive at the expense of having their limbs severed. The only one there with no injuries was presumably the youngest member present.

Members of the Crazy 88 wear pretty much the same outfit; wearing a black suit, wearing a black "Kato" mask. Aside from Johnny Mo, who wielded a pair of shōtō short swords, most of them carried a single sword with only two exceptions seen; one wielding dual axes and another a meteor hammer.

The Crazy 88 was O-Ren Ishii's personal army, under the leadership of Johnny Mo.

The Crazy 88 have resided in Japan for an unknown amount of time as a major Yakuza gang. One year after the Two Pines Massacre, O-Ren Ishii, with the help of Bill was able to take control of many major companies in Japan and became what Beatrix Kiddo referred to as the "Queen of Tokyo's underworld." With her financial power, she was able to gain leadership of the Crazy 88, and thus they were to follow her orders from then on.

Showdown at the House of the Blue Leaves

Four years after the massacre at Two Pines, Beatrix Kiddo awoke from her long coma and sought revenge against the Deadly Viper Assassination Squad. Since O-Ren Ishii wanted power before The Bride's massacre, O-Ren was the easiest to locate and the first on The Bride's Death List Five.

The Bride found out that O-Ren, her lawyer and second-in-command Sofie Fatale, personal assistant Gogo Yubari, and several members of the Crazy 88 were going to the House of the Blue Leaves. When she arrived, she challenged O-Ren and sliced off Sofie's arm. O-Ren ordered the Crazy 88 members to kill The Bride, but she quickly dispatched them.

After that, Gogo and The Bride fought, but The Bride also killed Gogo as well. O-Ren then ordered the rest of the Crazy 88 to kill The Bride. All of them, led by Johnny, quickly arrived and surrounded her.

The battle began and all the Crazy 88 attacked. Despite their numbers, The Bride possessed greater skill than them. She was able to kill or injure every one of them, including Johnny Mo. After the battle ended, The Bride told the surviving injured Crazy 88s to go, but they should leave their limbs behind. Surviving members are hospitalized and arrested by police offscreen.

Despite Johnny Mo being the last member killed, one of the last of the gang The Bride confronts before O-Ren is a very timid teenage boy whose katana she cuts into several pieces with her own, after which he surrenders immediately. Deciding to spare him, the Bride spanks the boy with the flat side of her blade, and orders him to quit criminal life and leave the world of crime business with the words "Go home to your mother". The boy is the only Crazy 88 member who is not injured, killed, or dismembered. His fate is left unknown after he fled but it is implied that he had given up the life of crime, deeply traumatized by the events.

After the Showdown at the House of the Blue Leaves, it is unknown what happened to the Crazy 88 as an organization, but it may have dissolved, given so many of their number killed or incapacitated. 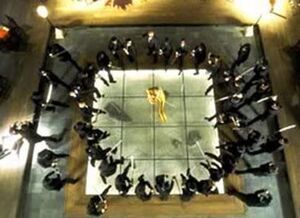 The aftermath of the House of Blue Leaves massacre.