Crazy Quilt is the name of the four DC supervillains and is a known enemy of Batman. He using color themed technology to hypnotise people and commit crimes.

The first Crazy Quilt was a talented artist whose paintings would leave clues for his henchmen on what crimes to commit. One day a henchman betrayed him by shooting him in the face. Crazy Quilt survived but was blinded by this instance. He volunteers for an experimental treatment that ended up only allowing him to see only bright colors. Angry at his misfortune he equips himself with a helmet that can fire lasers, and can hypnotize victims with flashing colors. He kidnapped a surgeon and forced the restoration of his sight. When Batman and Robin arrived, Robin reflected one of the lights back in his eyes, blinding him again. He has since become more of Robin's enemy than Batman's. Another villain named Paul Dekker impersonated Crazy Quilt once, and is often confused as Crazy Quilt's true identity. Crazy Quilt later nearly beat the second Robin to death thinking it was the original Robin that had blinded him. The original Robin, now known as Nightwing, managed to stop him. He was later a minor member of the Secret Society of Supervillains.

A female version of Crazy Quilt is often seen among the Secret Society as well. She also frequently fought the Secret Six.

Paul Dekker was a fence posing as an antiquarian. He also donned a costume to steal works of art, which he used to store other than hot stolen goods.

Paul Dekker’s history was altered for the New 52. In this continuity, Paul was one of three scientists who attempted to replicate the effects of Dionesium; a chemical with regenerative qualities that could give one immortality if the strain is pure enough. After the Joker became exposed to a pool of Dionesium, he worked together with Dekker to create a new and deadly Joker virus using Dionesium he extracted from his spine. Joker claimed this chemical strain to be pure and seemingly gave a syringe full of it for Paul to use for himself.

During the Endgame comic arc, Batman confronted Paul Dekker over what he knew about the Joker virus and Dekker told him while trying to gun down the vigilante. Batman managed to tackle him through a two-story window, leaving Paul dangling from his patched quilt over a crowd of Jokerized citizens. With little choice, Paul decided to use his syringe of Dionesium on himself despite Batman’s warnings that Joker would not share the chemical. Dekker injected the syringes contents into his body and it immediately caused his flesh to decompose. He then fell into the infected crowd below where he was torn apart.

Crazy Quilt was revived at some point during the events of DC Rebirth. Presumably due to alterations made to the timestream.

He first appeared in the episode "Trails of the Demon" where he robs an art museum, but is foiled by Batman. He later appears in "The Color of Revenge" where it is revealed in flashback that after a fight with Robin he became color blind. In present, he tried got revenge on Robin through a series of traps and robberies, while he fails, he manages to steal an experimental color tank which he uses on Batman and Robin. He almost defeats them, however, Robin is able to beat him in the end and he is sent to Arkham Asylum. He later makes a cameo in the episode "Mayhem of the Music Miester".

At one point some of Penguin goons are debating about who took down Two-Face and one thinks that Quilt could have done it, but the other men are skeptical.

He appears as a villain in The LEGO Batman Movie. 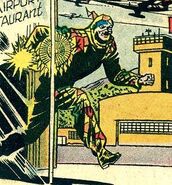 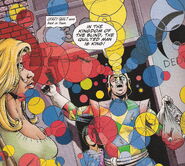 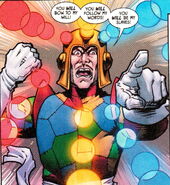 Add a photo to this gallery
Retrieved from "https://villains.fandom.com/wiki/Crazy_Quilt?oldid=3592606"
Community content is available under CC-BY-SA unless otherwise noted.