Avoid being eaten by others.

The Crazy Squares are the mascots for General Mills' Cinnamon Toast Crunch cereal brand, introduced in December 2009 and appearing as the main protagonists of various commercials and advertisements. They are a race of anthropomorphized Cinnamon Toast Crunch cereal pieces that emphasize how delicious the cereal is by eating each other, either by attacking each other with brute force or setting traps for other Crazy Squares to fall into so they may subsequently be eaten.

Throughout the various commercials, the Crazy Squares are often seen licking the cinnamon sugar off of each other, waiting until they are distracted before taking bites out of each other, or expanding their mouths to larger than their bodies to devour other Squares in one bite. In some commercials, the Squares drink the milk the other Squares are in, pulling them in and eating them in the process. Occasionally, the Crazy Squares will be seen working together to try and eat other Squares. In one commercial, a Crazy Square is even seen eating itself until it is nothing but a disembodied mouth and some crumbs. The main two Squares are referred to as Grunter and Chomper.

The Crazy Squares also appear as characters in a series of flash games on the brand's website, where the player can stack them or try to prevent them from eating each other. They also appear as the main protagonist of the mobile game Crazy Squares: Milk River Run, where they navigate through a river of milk while eating other Squares.

Additionally, the Crazy Squares have also made crossover appearances with other General Mills characters like the Trix Rabbit, Lucky the Leprechaun, Buzz the Bee, Sonny the Cuckoo Bird, and Chip the Wolf. 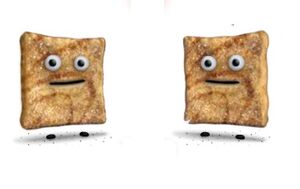 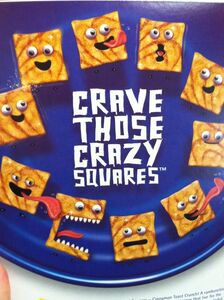 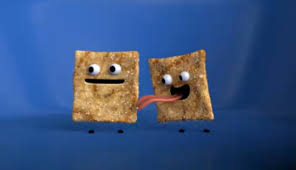 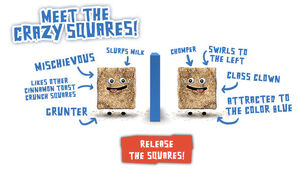 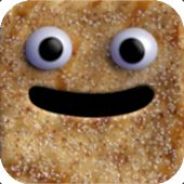 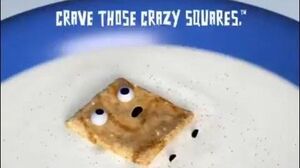 The Crazy Squares
Add a photo to this gallery
Retrieved from "https://villains.fandom.com/wiki/Crazy_Squares?oldid=3396029"
Community content is available under CC-BY-SA unless otherwise noted.