An ex-drag racer, Crazybolt and Slicedice were arrested after Crazybolt leveled Steel City, claiming that the buildings impeded his mobility. He was placed in a stasis pod and sent away aboard the Alchemor, only to be freed when the ship crashed on Earth. The duo continued their high-octane rampage across Earth's highways, although Bumblebee's team eventually tracked them down. The two fled; Crazybolt used a smokescreen to send Strongarm onto an overpass, distracting her while they made good their escape.

After some more driving, Crazybolt and Slicedice discovered a nature reserve. Slicedice, offended by the sign, goaded his partner into burning down the sign... and the entire forest, viewing it as an insult to their desire for unimpeded speed. Although Bumblebee and Grimlock grappled with the Decepticons, they were unable to subdue either before the flames forced them to break off. The Decepticon duo took advantage of the fire and fled the scene.

The pair later met up with Scorponok in a disused drive-in, awaiting a meeting with Steeljaw. The surly Scorponok was swiftly irritated by their tardiness and their need for speed, not helped by Steeljaw's absence... and not realizing that Steeljaw had set them up to get attacked by the Autobots (who he'd set up to get attacked by Scorponok as a distraction for his own ends). Though eager to hit the pavement, Crazybolt was afraid enough of Scorponok to try and end the fight quickly, so he blasted Bumblebee with a burst of flame-breath. But the Autobot used Slicedice as an impromptu shield, and quickly got the upper hand on Crazybolt... but Scorponok had gotten the upper claw on Grimlock, forcing Bumblebee to back off. Bumblebee then used a little flim-flam to distract and confuse the Decepticons, setting them up for him and Grimlock to take them down. Crazybolt and the others were promptly locked away in stasis pods. Crazybolt's stasis pod was later taken back to Cybertron by Optimus Prime, Windblade and Ratchet. 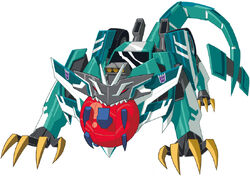