Creative Messenger Mikela, his full-name being Mikela Shu Yuankachi Makatuku Damosu Koni, is a member of the Evolians and a major antagonist in Abaranger. He is the one who creates the Trinoids using his three-colored paints and dislikes to create something when uninspired by his muse. He also hates humans, finding their art and culture to be inferior.

He is voiced by Bunkou Ogata.

He and Visionary Messenger Voffa were once the same amoebic entity until they were split and evolved into their current states.

Sometime before the start of the series, Mikela created Trinoid 0: Saunaginnan and upon discovering how powerful the Trinoid was, he sealed him away in a red orb.

When Lije brought Abare Killer to Dino Earth and had him demonstrate his power, Mikela and Voffa reluctantly submitted to his leadership. He eventually discovered that Mikoto Nakadai held Dezumozorlya's Earth half using Trinoid 21: Reindeiasanta and began planning on bringing his master back together. He and Voffa initially attempted to do so by tricking AbareKiller into piloting Giganoid 11: Inextinguishable, but this plan was thwarted by the Abarangers. Upon finding out the truth about how he was manipulated, AbareKiller deserted the Evolians.

Mikela was later combined with Voffa back into their original form, DezumoVoorla, for Dezumozorlya to possess as a temporary host. In this form they attempted to reawaken Bakurenoh so Dezumoryla could possess him, but both Mikela and Voffa were destroyed when DezumoVoorla was slain by AbareKiller, while Dezumozorlya fled their body to enact one final plan. 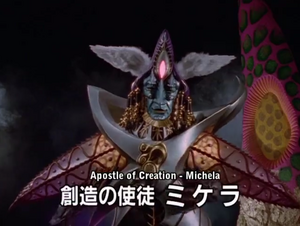