Supreme General of the Holy Knights

Demonic powers due to the Acension Ceremony

Leading the Order's Holy Knights into policing Fortuna and protecting its citizens.

To lead the Order of Sword in purging Earth of evil.
Protect his sister Kyrie.

Credo is the Supreme General of the Holy Knights, a group of loyal guardians of the island of Fortuna, and a sect of fanatical demon hunters belonged to the island's same local and militant religion known only as the Order of the Sword along with his sister Kyrie and their long-time friend and adopted brother Nero. He was an antagonist-turned-supporting protagonist from Devil May Cry 4.

He was voiced by Terence J. Rotolo, and played by Daniel Southworth in motion capture.

Credo became the leader of the Holy Knights due to his skill with blades and his unquestionable loyalty to the Order of the Sword, as well as their beloved leader and high priest Sanctus.

During a sermon given by Sanctus, Dante crashed in through the ceiling of the opera house and shot Sanctus point blank in the face, in front of the entire crowd of the citizens of Fortuna. Credo quickly ordered his knights to get Dante while he attended to Sanctus. Before the Son of Sparda could finish off the priest and even the rest of his sect, Nero jumped in and held off Dante, while Credo got Kyrie, his sister and Nero's love interest, to safety and went for reinforcements. He returned, only to find Dante had just escaped and, after berating Nero for his carelessness towards the situation, gave him a new sword, the Red Queen. Credo then left the job of taking care of the demons up to Nero.

Later Credo watched as Sanctus underwent the Ascension Ceremony, giving him demonic power. As the priest awoke, he reported the situation concerning Dante, when Agnus arrived to alert Credo to the threat Nero presented to his research, though Credo paid it no heed. In another meeting, he, Agnus, Gloria, and Sanctus discussed the current situtation. After Gloria left, Credo expressed concern towards her loyalty despite her bringing them the sword, Sparda, the same blade that the Order of the Sword's crest resembles as part of their faith.

Eventually Credo was sent to take care of Nero and revealed that he too had taken part in the Ascension Ceremony, transforming into an angelic demon form. Despite his skill, Credo was defeated and Nero absorbed part of his shield, forcing him to retake his human form. Before their battle could conclude, Kyrie appeared and was shocked to see Nero's Devil Bringer arm. Agnus appeared and kidnapped Kyrie, prompting Credo to turn on the order so as to save his sister.

As Sanctus was activating the Savior, Credo attacked him only to be impaled by Yamato. When the priest asked him why he had done so, he said that though he had believed in everything the Order of the Sword had stood for, his faith in Sanctus was shattered when he used Kyrie as a pawn in his game. Sanctus, thinking that love for another was worthless, threw Credo from the Savior. However Dante appeared and caught him and as he died, he told Dante and Trish about Sanctus's plans, then begged them to save Nero and Kyrie.

Credo's death greatly impacted Nero following his and Kyrie's departure from Fortuna and founding his own branch of Devil May Cry group. His inability to protect his said childhood friend and sibling figure haunted Nero and filled him with self-loathing for his weakness that Dante touched on by referring to him as "dead weight." The time they spent together soon became the spark that motivated Nero to put an end to Vergil and Dante's rivalry as he refused to let another person he loved die, leading him to awaken his true Devil Trigger and regrow the right arm he lost to Vergil a month prior.

Even before undergoing the Ascension Ceremony, Credo was a skilled swordsman. After he underwent the ceremony, he gained the superhuman abilities typical in demons and the ability to fly, despite his having one "angel" wing. Credo's shield could also block most attacks and he could create spears to use a projectile weapons. 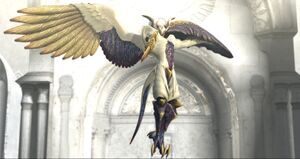 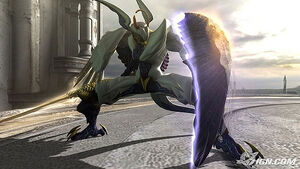 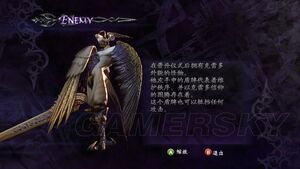 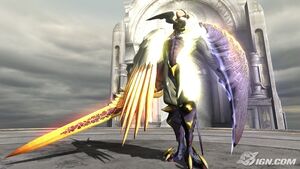 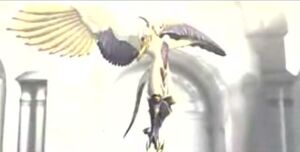 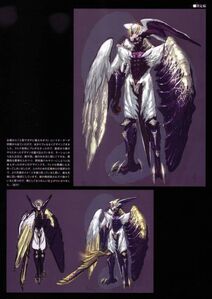 Retrieved from "https://villains.fandom.com/wiki/Credo?oldid=3554458"
Community content is available under CC-BY-SA unless otherwise noted.