Aid Chef in capturing the other Trolls in order to escape from being eaten by the Bergens (both abounded).
Apologize to the Trolls for his betrayal (succeeded).

Creek is the major antagonist in the Trolls franchise, serving as the secondary antagonist of DreamWorks's 33rd full-length animated feature film Trolls, a supporting character of the canon Netflix series Trolls: The Beat Goes On! and the Hulu series Trolls: Trollstopia. He is a wise troll who was Branch's arch-nemesis, Poppy's close friend and crush, and Chef's former loyal minion. He returns in Trolls: The Beat Goes On! (the canon Netflix series to Trolls), which takes place after when Trolls left off, proving he is alive and he redeemed himself.

He was voiced by Russell Brand, who also voiced Dr. Nefario in Despicable Me and Dr. Zomboss in the Plants vs. Zombies franchise. In the TV series, he is voiced by Matt Lowe.

Because of a huge loud party that Poppy threw, Creek, along with a minority of the Trolls, were captured by Chef, a Bergen who was banished from Bergen Town by King Gristle Sr. for the Trolls' escape that occurred 20 years ago. Chef was able to locate and capture the Trolls thanks to Poppy's partying antics.

Poppy and Branch set out to rescue the captured Trolls. They managed to save all but Creek, whom they thought was eaten by Gristle Sr.'s son and the current leader of the Bergens King Gristle. Later whilst Gristle was on a date with "Lady Glitter Sparkles" (in reality his scullery maid Bridget), Poppy and the other Trolls (who were using their hair to make Bridget's colorful), saw Creek trapped in a gem on the King's cloak. The Trolls stole the gem, but found the gem empty. Just then, Chef appeared and trapped them, revealing that Creek is alive and is selling out his fellow Trolls to save himself, to which Creek confirms. Poppy angrily demands an explanation for this, to which Creek explained that he previously had to save himself from being eaten by Gristle by offering to lead Chef and the Bergens to the Trolls' hiding place, a proposal that Chef happily accepted. Creek tells Poppy that he wished that there was another "me not getting eaten" way, but there isn't and that he has to live this choice for the rest of his life and says to Poppy that he is doing this for her as she dies with a clear conscience knowing that.

Creek then takes Poppy's cowbell and returns to the Trolls' village and rings it in order to trick Poppy's father King Peppy and the other Trolls into thinking that Poppy has returned, only for them to be captured by the Bergens. He then remained in Chef's pouch for the remainder of the day until Poppy formed a peace between the Trolls and Bergens, and Chef and Creek are banished out of the Bergen town into the wilderness on a serving cart.

In the mid-credits scene, Chef turned against Creek and tried to eat him, but before she could do so, a monster (shaped like a hill they're standing on) devoured them both and receiving his comeuppance against his treachery against the trolls.

Creek has recently been revealed to have survived this encounter somehow and went through an official redemption act, though he and Branch still have a natural rivalry / dislike of one another, however, he does not make an appearance in Trolls World Tour, likely making the events of Trolls: The Beat Goes On non canon.

Trolls: The Beat Goes On

Creek returns in the Netflix series, which takes place after Trolls. In Creek Week, Creek was later shown to have somehow survived being eaten by the hill monster and returns to Troll Village to be welcomed back after apologizing and that he has strong fears especially when the lives of his friends are in danger. Creek came back and said he is very sorry for betraying them, which works out.

Creek is the most clever, positive, supportive, reassuring, and sympathetic Troll in all of Troll Village, approaching everything with Zen like wisdom. He is calm, polite, collected, thoughtful, friendly, and capable. But being beloved by everyone sometimes has its drawbacks, and literally lands Creek in hot water. This is later shown to be a facade to hide his true nature: a treacherous, cowardly, and evil trickster who is willing to kill his own race and become Chef's assistant as long as he survives. 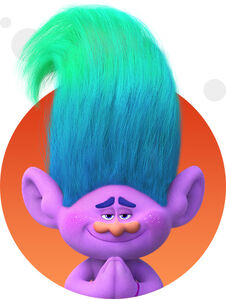 The first time Creek is seen.

Creek revealing his true nature as he betrays Poppy and the other trolls.