To escape from Bergen Town (formerly).

To aid Chef in capturing the other Trolls in order to escape from being eaten by the Bergens. (all failed)

Creek is a troll who is the former crush of Poppy and the secondary antagonist in DreamWorks's 33rd full-length animated feature film, Trolls.

He was voiced by Russell Brand who also played Dr. Nefario and E.B..

Creek is the most clever, positive, supportive, reassuring, and sympathetic Troll in all of Troll Village, approaching everything with Zen like wisdom. He is calm, polite, collected, thoughtful, friendly, and capable. But being beloved by everyone sometimes has its drawbacks, and literally lands Creek in hot water. This is later shown to be a facade to hide his treacherous cowardice, his true nature being a treacherous, cowardly, and affably evil trickster who is willing to kill his own race as Chef's assistant as long as he survives.

Creek, along with the majority of the trolls, was captured by Chef, a Bergen who was banished from Bergen Town twenty years previously by King Gristle Sr. for the Trolls (which the Bergens ate) escaping from them.

Poppy and Branch set out to rescue the captured Trolls. They managed to save all but Creek, whom they thought was eaten by King Grisle Jr., but later saw him trapped in a gem. The Trolls stole the gem, but found the gem empty. Just then, Chef appeared and trapped them, and Creek was revealed to have betrayed his fellow Trolls to save himself from being eaten thus revealing himself for who he really is: a cowardly traitor. Creek tells Poppy that he wished that there was another "me not getting eaten" way, but there isn't. Now he has to live this choice for the rest of his life.

He then takes Poppy's cowbell and returns to the Trolls village and rings it in order to trick Poppy's father King Peppy and the other Trolls into thinking that Poppy has returned, only for them to be captured by the Bergens. After Poppy and the other Trolls make peace with the Bergens, Creek, along with Chef are knocked out of the Bergen castle. Chef turned against Creek and tried to eat him, but before she could do so, a monster devoured them both which gave him comeuppance for his treachery against the trolls. 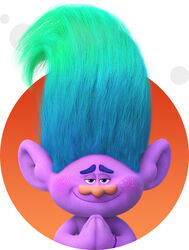 Creek's death.
Add a photo to this gallery

Retrieved from "https://villains.fandom.com/wiki/Creek?oldid=1816369"
Community content is available under CC-BY-SA unless otherwise noted.