Deceiving others into doing his bidding.

Causing death and destruction whenever he feels like it.
Antagonizing Livingstone.
Operating in the shadows.
Gaining power.

Take control over the Core and use it to subjugate other worlds, despite knowing that all of Animalia will die off as a result (failed).

Wooster Q. Weasel, also known as the Creeper, is a villainous and power-hungry long-tailed weasel, Livingstone's archenemy and the main antagonist of Season 2 of the animated series Animalia.

He was voiced by Joe Ochman.

Not much is known about the Creeper prior to the show's events, but Livingstone reveals that he used to be the original ruler of Animalia and a friend of him. Unfortunately, the Creeper became too obsessed with his power and went from a wise leader to a deranged, ruthless tyrant who mercilessly oppressed Animalia and all of its inhabitants.

He used a series of portals to steal precious possessions from the Animalians' homes as well. Livingstone had to topple his former friend and banished him by imprisoning him inside the underground caves of Animalia, trapping The Creeper in his own portals. Livingstone then became the next ruler of Animalia.

One day, however, while traveling through the portals of Animalia, Alex comes across The Creeper, not knowing about him, who masquerades as a friendly character named "T.C." and manipulates Alex into freeing him from his prison. The Creeper successfully escapes and begins to plan his revenge.

Throughout the rest of season 2, the Creeper remains largely in the shadows and manipulates Tyrannicus Tiger into nearly starting a war, something that had never happened in Animalia before. Eventually, The Creeper reveals himself in the series finale, where he successfully corrupts the Core of Animalia and takes over once more. The heroes manage to triumph over him, and Livingstone decides to offer him a second chance.

The Creeper seemingly feels remorse at what his actions caused, but this turns out to be a lie so he can trick Livingstone and Alex into falling to their deaths while he gets rid of their friends. The Creeper then willingly enters the Core, further corrupting it in his attempts to reign supreme. Livingstone, who had outsmarted the twisted weasel, quickly touches the Core while The Creeper is inside it, causing him to be shot-out to the Winds of No Return, which apparently kills him and defeats him once and for all.

Unlike Tyrannicus and Allegra, both of whom are antagonistic presence but are ultimately big jerks with a soft side, The Creeper is a purely malevolent, sadistic and sociopathic being willing to damage the Core of Animalia to fulfill his twisted desires. He is quite intelligent, deceptive, and manipulative, something which he uses to his advantage and to fool enemies and allies alike into either doing his bidding or assist him in his goals. Among his schemes, he came dangerously close to start a war in Animalia. All of these features make the Creeper a truly wicked villain for such a light-hearted show, as he has moral agency over his actions and yet chooses to be an omnicidal and sadistic maniac.

The Creeper, being a weasel, is capable of being flexible. He also has knowledge of the entire city's magic and the Core. 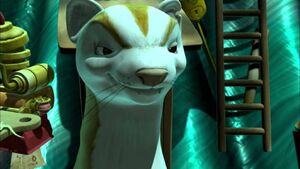 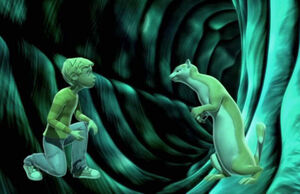 Retrieved from "https://villains.fandom.com/wiki/Creeper_(Animalia)?oldid=4288730"
Community content is available under CC-BY-SA unless otherwise noted.