Right-hand to the Horned King (formerly)

Tending to the Horned King's needs.

Gathering skeletons for the Horned King's new army to forge.

Aid the Horned King in his villainous plans (formerly).

Creeper is the secondary antagonist from Disney's 25th full-length animated feature film The Black Cauldron. He is a goblin who used to serve as the Horned King's right-hand and laughable lackey until the latter's defeat.

He was voiced by Phil Fondacaro.

Creeper is one of the henchmen of the Horned King who lives in his castle. He is constantly abused by the Horned King, who blames Creeper for things going wrong (even if it was not Creeper's fault) and chokes him when he thinks that Creeper is not doing what he wants him to do.

Creeper appears again when he angrily orders a henchmen to move a rolling basket full of dead people, all of which have been murdered by the Horned King's men. Creeper and the men soon learn that Taran and his friends Princess Eilonwy and Fleudder Flam have escaped their confinement, so they chase them. However, thanks to a magic sword Taran has claimed from a tomb inside the castle, Taran and his friends were able to escape, much to Creeper's shock. Knowing that the Horned King will be very furious, Creeper reluctantly strangles himself after confessing what happened, but the Horned King is quite impressed, knowing that Taran will be looking for Hen Wen (and the Black Cauldron), so he orders Creeper to sends the gwythaints to follow Taran. The gwythaints manage to locate Taran and his friends after they found the Black Cauldron, allowing the Horned King's men to capture them and steal the Cauldron.

Even though it would have seemed that the Horned King is about to achieve his victory, this was cut short when Gurgi sacrifices himself into the Black Cauldron, reversing the spell and causing the undead skeletons to lose their power and die. The angry Horned King blames Creeper and strangles him, planning to throw his body into the Cauldron to revive the undead army. However, as the Horned King tries to get his undead army to rise again, Creeper spots Taran trying to escape and informs the Horned King, saying that Taran is to blame. Finally understanding what was really happening, the Horned King throws Creeper away before turning his rage towards Taran for foiling his plans.

However, Taran pushes the Horned King into the Black Cauldron, as its powers are being sucked up thanks to Gurgi's sacrifice. Creeper can only watch his master screaming in agony as the Cauldron's power kills the Horned King and blows his corpse into bits. At first, Creeper is horrified by this, but realizes that he has been freed from the Horned King's abuse, as he won't be punished for anything (whether it be his fault or not). Delighted by the Horned King's death, Creeper laughs triumphantly as he escapes from the exploding castle caused by the cauldron's power.

As Creeper leaves, he manages to save a gwythaint from dying in the destruction of the castle. He is last seen riding off with the gwythaint laughing while holding out two fake horns to taunt his former master. This is the last time Creeper is seen in the movie, but it can be implied that he has go to live for his own, finally free as the Horned King is no more.

Creeper is intelligent and fiendish, but he does not inspire respect for anyone. Considering him a jester, the soldiers of the Horned King like to mock and brutalize him. However, he is loyal to the Horned King, but is also afraid of him due to his mistreatment towards him. The Horned King blames Creeper for things and chokes him when he thinks he isn't doing what he wants him to do, seeming to consider him more a trained dog than a real aide-de-camp. But if he fears his master, if he is often fearful and cowardly, Creeper remains a dangerous character. Indeed, his sadism is deep. And Creeper is ultimately quite clever. Although Creeper enjoys nothing more than serving the Horned King, he hated his master, as evidenced by his joy at the Horned King's death. 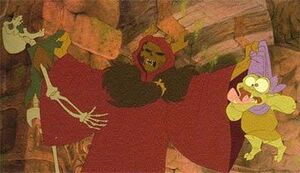 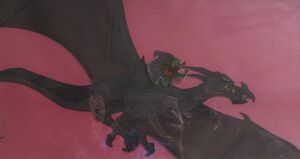 Creeper happily rides on a Gwythaint, celebrating his freedom from the abusive influence of the Horned King.