The Creeper is a recurring antagonist in the Scooby-Doo franchise. He is one of the most recognized villains in the series. He is a disfigured phantom with yellow eyes, pale green skin and brown hair. He wears a green coat and matching pants with a black undershirt and shoes. He was voiced by the late John Stephenson.

The Creeper first episode in the Scooby-Doo, Where Are You? episode, Jeepers! It's The Creepers! The Mystery, Inc. kids are on their way to a school Barn Dance and Hayride on an old farm. They come across a bank guard who was lying on the road knocked out, as he comes around he gives Fred a blank piece of paper and mumbles "The flame will tell the Creeper." As they look for clues, Scooby finds a letter with the home address of the bank manager, Mr Carswell, which is near where they are, so they go there for help (not knowing the bank manager was actually the Creeper until they unmasked him). After they left, he understood the message the bank guard was trying to tell the gang. He goes after them to get the paper, which later shows Carswell robbing his safes. Angry, he replied: "Blasted meddling kids!" before being taken away by the police.

Scooby-Doo and the Cyber ChaseEdit

The Creeper appears in the movie, Scooby-Doo and the Cyber Chase on the final level, along with monsters introduced on The Scooby-Doo show, and chase both gangs. He chases the Daphnes twice: Once to the funhouse, and again later in the film. He and the other monsters disappear once Scooby gets the box of Scooby Snacks after which all the monsters are gone. In the film, he was played by Scott Innes, who also played Scooby and Shaggy in the film. However Innes was not credited.

Scooby-Doo and the Cyber Chase: The VideogameEdit

Scooby-Doo! Mask of the Blue FalconEdit

He appeared during the opening of WrestleMania Mystery.

His most recent appearance was in the 2019 film, Return to Zombie Island. 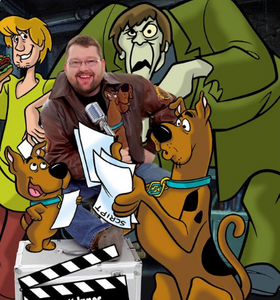 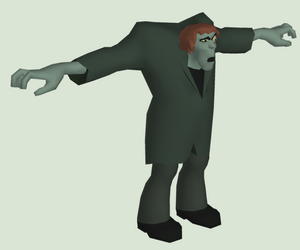 Retrieved from "https://villains.fandom.com/wiki/Creeper_(Scooby-Doo)?oldid=3854967"
Community content is available under CC-BY-SA unless otherwise noted.