To marry Luke Ross by any means necessary.

Constenteke Erica "Connie, also known as "Creepy Connie Thompson", is the secondary antagonist in Disney Channel's Jessie. Unlike most of the show's villains who are lighthearted and petty, she is a dangerous and clearly insane girl who has an obsessive psychotic crush on Luke Ross.

She is portrayed by Sierra McCormick, who also played Olive Doyle in A.N.T Farm.

She first a appears in "Creepy Connie Comes a Callin" watching Luke dance, meeting Jessie she originally seems just like a normal girl who is crushing on Luke. As she is quite bright, Jessie invites her to Tutor Luke. Despite Lukes warnings that she is "Creepy" although orginally seeming normal, she turns nasty towards Jessie after her and Luke interact, and confronting her accuses her of getting inbetween her and Luke, she then threatens to hurt her if she doesn't stop. When Luke backs out of going to the dance with her, (which Jessie made him agree to before learning she was nuts), she breaks into his home and steals his favourite teddy bear, threatening to destroy it if he doesn't go with her. Jessie confronts her, and tries to take it back but the conflict resorts to tearing the bear in two. However on the actual night they manage to convince Connie to leave, by revealing Luke has never read a single Harry Potter book, which Connie is equally obsessed over.

Connie returns in "Creepy Connie's Curtain Call" where following her restraining order expiring she saves Luke from a fall, she claims to have gotten over him, but is really still as obsessed. She auditions for a part in Jessie's new play, which Luke is playing the lead in. And manages to suck up to Jessie so much she agrees to trust her. However when she doesn't get the lead, she hurts the girl who was playing the lead. When Jessie gives the role to the understudy she does the same thing to the new girl. When Jessie casts yet another girl, she actually wields a wrench to the girls braces. With no other choice and still taken in by her nice girl act, Jessie casts her in the lead. However on opening night Luke tries to get out of the kiss, loosing whatever grip on sanity she had left, Connie proceeds to try and kill him with a flame thrower (with Jessie's dad, whose in the military lent her, to make a more realistic prop) deciding if she can't have him no one else can. Fortunetly, it turns out that Luke's brother, Ravi has fallen for Connie and she decides not to murder Luke and instead start dating his brother.

Connie returns again in "Creepy Connie 3: The Creepening" having returned back from the boarding school she was sent to, having apparently finally gotten over her obsessive crush over Luke and apparently no longer remembering Ravi. However she warns him her former roomate Mackenzie or Mad Mack is now obsessed with Luke. Luke at first dismisses her claims, but upon inviting her over Mackenzie proves its true and tries to handcuff herself to Luke. Connie bursts in and saves Luke, but Mackenzie swears she will return. Later they get a video from her showing she is still in the house. Connie joins them to find Mackenzie, she convinces Jessie and Ravi separate to search down stairs. However upon getting there the elevator breaks down. Connie then reveals that she really is just as obsessed with Luke and was pretending to get him here. She then reveals that Mackenzie is really an actress she hired to fool Luke, Mackenzie then asks about getting paid, but Connie kidnaps her and forces her to watch as she forces Luke to go through a wedding, complete with mannequins to act as guests. Luke manages to escape in the confusion, but Connie chases after him throughout his home. Jessie manages to climb out of the elevator and tries to help, but Connie manages to hit both of them with blow darts and kidnaps them both. She then forces them to watch her wedding ceremony, she also kidnaps Ravi for the same process. Beginning the ceremony, using a dummy made by her hand as a minister, duct taping her victims' mouths shut to prevent objections, they are interrupted when Emma, Zuri and Bertram get home, however Connie just kidnaps them as well and also forces them to watch. The ceremony completed she tries to forcibly kiss Luke, however at that moment Emma's boss arrives to rehire her, and it turns out he is Connie's uncle. As such he manages to stop her and take her home. It's completely unknown if she was arrested for kidnapping Luke, Jessie, Makenzie, and Ravi or was just send to a mental hospital in order to cure her from her obsession. 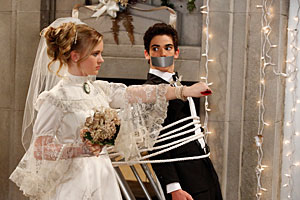 Retrieved from "https://villains.fandom.com/wiki/Creepy_Connie_Thompson?oldid=2962701"
Community content is available under CC-BY-SA unless otherwise noted.