The song tells the story of the protagonist, who moves to a house at the top of a hill in a small town near the woods. Everything seems fine until that night, when the protagonist hears a noise upstairs. Investigating with a flashlight, the protagonist finds an old attic and feels a feeling of dread that he/she has felt somewhere before. He/she looks into the room, and sees the doll staring at him/her. Frightened, the protagonist slams the door and runs, but the doll does nothing.

The next day, the protagonist goes antiquing and buys a small wooden box from a creepy man, with the key having his/her name engraved into it. The protagonist returns home, and the doll is waiting, fully animated and alive now, and begins pestering the protagonist.

Over the next few days, the doll continually scares and pesters the protagonist, waiting for him/her at night, eating his/her food, and generally stalking and psychologically torturing him/her. The song also says that the doll has the capability to eat a human whole, though this is never described or elaborated on.

One night, the protagonist gets up to make some tea, and the doll follows him/her and mocks them. Deciding that he/she has had enough, the protagonist locks the doll in the antique box and throws both it and the rest of his/her money into the fireplace.

While trickier and more mischievous than outright deadly like a dangerous snake or a monster, the doll is still very threatening, with its constant tricks and annoyances wearing down the psychological health of its victims. It is unknown why the doll acts this way or even how it became possessed/alive in the first place. 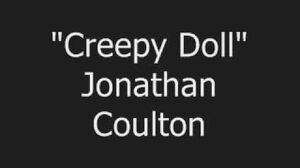