Crew of the Silent Mary

Crew of the Silent Mary

Pirates of the Caribbean: Dead Men Tell No Tales

Obtain the Trident of Poseidon to regain humanity and eliminate all pirates of the Earth (both failed).

The Crew of the Silent Mary are the primary antagonistic faction of the 2017 film Pirates of the Caribbean: Dead Men Tell No Tales. They are a crew of undead Spanish sailors who serve under the ruthless Capitán Armando Salazar bent on exterminating pirates around the world, especially the heroic pirate Jack Sparrow.

Just like their captain, the crew were members of the Spanish Royal Navy that served on the Silent Mary under the command of King Ferdinand VI. Fiercely loyal to their captain, they followed his orders by exterminating many pirates during their time, which they all took great delight in; even some of the stories of their pirate hunting expeditions claimed that they've hunted down and killed thousands of pirates.

It wasn't until they went sailing after a young pirate named Jack Sparrow, as Salazar didn't want to miss out on killing any pirates, that he would meet his match. Having taken up the mantle as captain of the ship after the previous one was killed by Salazar's cannon fire and taunting Salazar to convince him to follow them, Salazar lead his crew in pursuing them, but just as Jack planned, he lured them into the currents of the Devil's Triangle's waters, where their ship was mangled by rocks. This causes the powder stored within the ship to ignite and consume the ship with an unrelenting fire, seemingly killing Salazar and the entire crew.

However, it turns out that the crew's bodies begun to sink to the bottom of the sea and were suddenly struck by streaks of eerie red light, resurrecting them as the undead by the mysterious supernatural powers of the Triangle, where they were currently trapped. Unable to escape from the Triangle, Salazar and his undead crew of spent several years in a cave, plotting their revenge on Jack Sparrow.

Escape from the Devil's Triangle

25 years after their imprisonment in the Devil's Triangle, Salazar and his men spotted the Monarch, a British Royal Navy warship, entering their cave. As the Monarch came to a halt, the crew ran across the water, boarded the ship and launched a surprise attack. Due to their ghostly powers and immortality, they easily slaughtered the British soldiers onboard.

With the battle effectively over, Salazar walked below deck finding a single young sailor named Henry Turner locked in the brig. Noticing several wanted posters of Jack Sparrow on the floor, Salazar stabbed one of them with his sword to bring it closer to him. Salazar asked Henry if he knew the pirate. When Henry replied that he knew Sparrow only by name, Salazar allows Henry to escape to find Sparrow and give him a message about death coming straight for him.

After Jack ends up trading his prized compass away on a whim for some rum, the Devil's Triangle sinks into the sea, which allows Salazar and the rest of the crew to finally escape, steering the Silent Mary into the open sea for the first time in years. Though the ship was now nothing but a wreck, she was kept afloat due to the magic. Salazar eventually planned to find the legendary Trident of Poseidon, the mythical artifact which would give him and his crew absolute control over the seas so they could continue their mission and kill all of the pirates in the world, starting with Jack Sparrow.

Freed from the Devil's Triangle, Salazar and his men continued their anti-piracy campaign by encountering a pirate fleet commanded by Hector Barbossa, the Pirate Lord of the Caspian Sea. Without hesitation, they quickly attacked and destroyed three of its ships, the Jonty Lark, the Golden Pheasant and the Rising Phoenix.

Though the rest of the fleet managed to escape, the message the undead Spaniards sent was clear - the dead have taken command of the sea. Some time later, the Silent Mary encountered the Queen Anne's Revenge, Barbossa's flagship. As the Silent Mary approached the Revenge, the crew used their magical powers to bend the bow of their ship backwards, opening the ship's hull like the jaws of a giant beast right in front of the pirate vessel, leaving the pirate crew stunned and unable to react. However, before they could destroy the ship, Barbossa manages to convince Salazar, if just barely, to allow him some time to lead him to Jack in return for sparing him and his crew, though not before Salazar has his men kill a considerable number of Barbossa's out of spite.

Later on, Salazar and his crew spot Jack on another ship called the Dying Gull and attempt to attack. However, Jack, along with Henry Turner and Carina Smyth (who is later revealed to be be Barbossa's daughter), escape on a lifeboat to a small island. Salazar and his crew follow the three to the island, but they soon realize that they can't enter on dry land, as evidenced when one of the crewmembers instantly turned into dust after setting foot on dry sand. Despite this, Barbossa manage to catch up to Jack and the others, but decides to help them as he wants to use the Trident to destroy Salazar and his men for good.

Using an old map (which Carina found) that marks the location of the Trident, Jack and his gang sail to a spot called Black rock Island with the Black Pearl, where they finally spot the Trident. However, this caused the ocean to create a huge rift, which Salazar and his crew use to follow them to it, resulting in a battle between Jack and Salazar over the trident while the crew watches. However, Henry destroys the Trident to end all curses that roam the seas, causing Salazar and his men to turn back into normal people, but this also causes the ocean rift to finally close. As Barbossa reels in Jack, Henry and Carina to safety by using the Black Pearls anchor, Salazar, still bent on killing Jack, and two other crewmen cling to it, leaving Lieutenant Lesaro and the rest of Salazar's crew to drown to their deaths. Fortunately, Barbossa managed to sacrifice himself to save the trio, killing Salazar and sending his two remaining men drowning to their deaths in the ocean floor below. 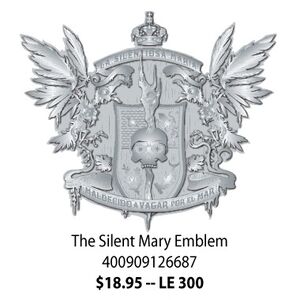 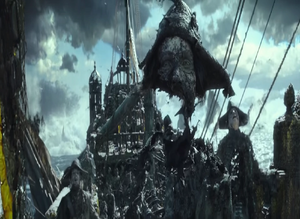