Leader over a criminal mob.

Control all the non-Maggia criminal gangs and take over New York City.

The first and original Crime-Master, Nick Lewis Sr. was a mob boss who tried to take over all of the mobs in New York. Initially partnering up with the Green Goblin, he later broke with his partner, safe in the knowledge that they both knew each other secret identities so no one could ever reveal them.

He tried to kill Spider-Man, but was gunned down on a rooftop directly across from the Daily Bugle Building, and died before he could reveal to the police the true identity of the Green Goblin.

Nick Lewis Jr. became the new Crime-Master, wanting to avenge his father's death, at the hands of who he believed responsible, Spider-Man. Allying himself with the new Big Man, Crime Master faced Spider-Man and the Human Torch. After killing his ally, he found out that the Big Man was the original's daughter, who was also his lover. Inconsolable, the heroes left him to the police. After this traumatic discovery, he has not reappeared as the Crime-Master since.

Bennett Brant was the brother of Betty Brant who got into gambling debt with a gangster named Blackie Glaxton to pay for his mother's medical bills. With the help of Doctor Octopus, Blackie Gaxton kidnapped both Bennett and Betty as insurance against anyone preventing him leaving the country. Bennett was double-crossed when Glaxton refused to free him of his debts and was fatally shot during a melee between Glaxton's gang, Doctor Octopus, and Spider-Man.

Apparently, Bennett didn't die and was taken by a criminal organization, which chose him to become the new Crime-Master. Bennett kidnapped a young boy, who he wanted to become his disciple and taught him to kill. At adulthood, he became his own Jack O' Lantern.

At the European Eastern country Nrosvekistan, Bennett sent Jack to find the Doctor Ekmecic, who was specialist in making weapons from Vibranium and also was being chased, but by a hero, the new Venom, who was working for the U.S. Army, who wanted to imprison Ekmecic.

While in the Savage Land, trying to get an Antartic Vibranium shipment, the mission was compromised by Venom, who was able to find the shipment and destroy it. After taking control of a helicopter of his, Venom was contacted by Crime-Master saying that he knew his identity and that Jack kidnapped Betty Brant. He told him Betty's location but warned him not to interfere.

Then Jack attended Thompson's father funeral, where he took him to Crime-Master, who assigned Venom a mission, blackmailing him with killing his family. Thompson went to Las Vegas and found Jack, who would go with him. At Las Vegas, in a secret lab, Jack and Venom found the Toxin symbiote, after battling an unleashed Venom, Jack flew away with the symbiote in a container.

He kidnapped Betty Brant again, but this time revealed his identity, that of her deceased brother. After Venom arrived to his hideout, Bennett almost killed him with a sonic pistol and a flamethrower, but he was shot and killed by Betty.

Venom later came across another Crime Master who was smuggling weapons into the city. Venom fights this Crime Master and notices that he is acting differently. At the same time, The Superior Spider-Man (Doctor Octopus' mind in Spider-Man's body) gets a call from Spider-Island 2 about Venom and the Crime Master and proceeds to have a small army assemble outside the building in which they are fighting. The Superior Spider-Man breaks into the building just as the Crime-Master takes off his mask. It is revealed that the man under the mask is an unnamed Maggia operative who had just bought the Crime Master identity and gear from the Hobgoblin. The Maggia operative then surrenders.

Crime Master subsequently hires Blood Spider, Death-Shield, and Jagged Bow to help him steal a damaged Rigellian Recorder from Deadpool and the Mercs for Money. After the heist goes awry, Crime Master attempts to buy the Recorder through an auction being held by Deadpool, but is outbid by the Ozarks Kingpin.

During the Civil War II storyline, Crime Master joins the Kingpin's organization and is killed by one of Fisk's enemies who defaces the corpse with a sign that reads "It's Not Your City".

One of Mister Negative's Inner Demons later impersonates the Hobgoblin's Crime Master in order to manipulate Black Cat and the Enforcers into helping him break into Ryker's Island, where he tries to assassinate Hammerhead and Tombstone. The plan is foiled by Spider-Man and the Wraith.

A Crime-Master exists in the Marvel Noir universe, where only his first name is revealed as Sammy, and serves as one of the primary antagonists in Spider-Man Noir: Eyes Without a Face. He has taken over New York since Norman Osborn was put on trial as The Goblin. His personal henchmen include the Enforcers and Sandman. He also helps to sponsor Otto Octavius in his experiments on African-Americans.

The man known as the Crime-Master was affiliated with the Ku Klux Klan and the Friends of New Germany, which the chairman, Josef Ansell of the later organization made him the masked villain to undermine criminal society in New York City in secretly abducting African-Americans to be experimented in Dr. Otto Octavius' experiments. Crime Master was known for his violent reputation against anyone who is against him, in which he even personally knife his victims.

Crime Master's actions were investigated from interferences from Spider-Man and were criticized for his superior for almost exposing Octavius' secrets and its connection to the Friends of New Germany. After escaping from the authorities after his henchman, Sandman beat up Spider-Man and killed by Jean De Wolfe and his men, Crime Master visited his lover Felicia Hardy and discovered that she solicited with Spider-Man. In retaliation, Crime Master beat Felicia and severely cut her with a broken mirror glass. Inevitably, Crime Master, as per instruction from Ansell, forced Octavius to close down his experiments and killing the prisoners. Fortunately, Spider-Man freed the prisoners and fought off the Crime Master's men. Crime Master desperately holds Robbie Robertson hostage just as federal authorities stormed Octavius' hideout in Ellis Island. Crime Master was then mercilessly vivisected and killed by Dr. Octavius as the mob boss was proved to be a liability to the Friends of New Germany.

A flashback sequence in the all-ages title Spidey depicts the Nick Lewis, Sr. version of the Crime Master being defeated and webbed-up by Spider-Man who disparagingly refers to the villain as "one of the dorks I keep the city safe from".

This version of Crime-Master is Mona Carlo who is revealed to be Crime-Master in the comic A Matter of Trust! (Amazing Spider-Girl #17). She is shown auctioning off Kingpin's disc. However, it is interrupted by the Hobgoblin and Mindworm, in which Hobgoblin finds Spider-Girl hiding and captures her. Hobgoblin bids her and claims no one can outbid him for the disc. However, Mindworm double-crosses him and tries to take the disc from Crime-Master. Spider-Girl, despite inside an unbreakable bag, escapes and intervenes and is later supported by S.H.I.E.L.D. agents which leads into a free for all for the disc.

Crime-Master tries to escape but is cut off from her fiancé (who is unaware of Crime-Master's secret identity) and tries to get the disc from her at gunpoint. He gets killed during the process and Crime-Master is revealed to be Mona Carlo, who is a friend of May Parker (Spider-Girl) and they both attended at the same high school together. She is traumatized by his death and explains that she wanted to sell the disc so that both of them could escape and be together. Shortly afterward, she is then apprehended by S.H.I.E.L.D. operatives and arrested.

The Marvel Noir version of Crime-Master is mentioned in Spider-Man: Shattered Dimensions. This version seems to be an enforcer working for Hammerhead as mentioned by Vulture's henchmen. In his orders, he killed Fancy Dan and put him in a garbage can due to him flirting with Hammerhead's girlfriend Janice Foswell. 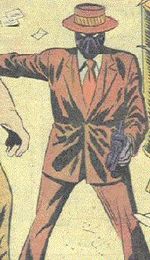 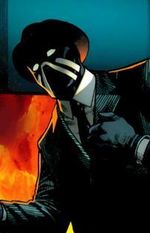 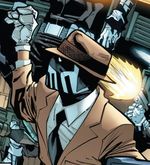 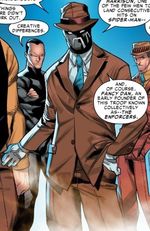 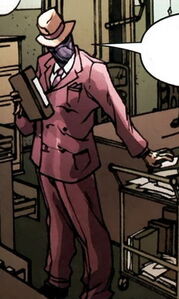 Sammy Crime-Master in Spider-Man Noir: Eyes Without a Face 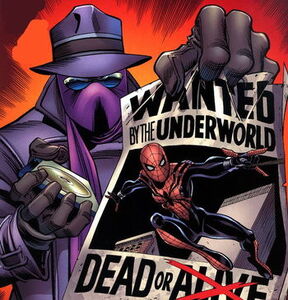