The Crime Doctor is surgeon Matthew Thorne – originally named "Bradford Thorne". In post-Crisis continuity, it has been revealed he is the brother of the Gotham City gangster Rupert Thorne. Thorne started out as a rogue physician in Gotham City, setting up an illegal clinic and treating criminals for money. He was stopped and apprehended time and again by the Batman.

For a while, it seemed that Thorne's mind had been destroyed due to mercury poisoning at the hands of the Sterling Silversmith, but Thorne later returned to his criminal career, his mind seemingly intact. The Crime Doctor usually never took part in physical battles against superheroes, but he was recruited by Lex Luthor and Brainiac into their supervillain army during the Crisis on Infinite Earths.

Initially, the Crime Doctor took his career as a doctor very seriously, and would not commit crimes that conflicted with his Hippocratic Oath. In later appearances however, he seemed to abandon this principle.

The Crime Doctor's recent appearances have all depicted him wearing star-shaped glasses. It was later revealed that those glasses were a trophy taken from his first victim, a young nurse named Katherine Wheyhall, who had suspected his sadistic inclination to murder and torture while witnessing him deliberately botching a surgery.

Later, the Crime Doctor paid a visit to the nurse and killed her, thus setting the basis of his newfound criminal career.

The Crime Doctor appears in Villains United, where he tortures the Secret Six for the identity of Mockingbird. This fails in the case of the 'Parademon', who equates torture with love. Breaking his restraints, Catman knocks him out with a metal tray table (where the Doctor had his medical equipment).

In the "Progeny" arc of Birds of Prey, the Crime Doctor tries to 'defect' from the Secret Society of Super Villains. The Society sends Prometheus to repay the Crime Doctor by torturing and killing his daughter as he had done to his victims. After a gruesome battle, the Birds of Prey almost manage to subdue Prometheus, but the Crime Doctor decides to kill himself, thus ensuring his own punishment, and sparing his daughter, who, alone and outcast by the other children, subsequently falls prey to the ambition of Lady Shiva to have a young apprentice to mold in her image.

The Crime Doctor appears in the Batman: The Animated Series episode "Paging The Crime Doctor". He was voiced by the late Joseph Campanella. This version is made into a sympathetic character. In this portrayal, Matthew Thorne's brother Rupert pushed him into the role. He attended medical school with Thomas Wayne and Leslie Thompkins, the three becoming close friends. Matthew later lost his medical license after failing to file a report about his brother's gunshot wound to his superiors. With his license gone, he now worked as "The Crime Doctor" for Rupert and his men in hopes that Rupert would one day use his influence in Gotham City to get Matthew his license back. In the episode, Rupert needed surgery and since he was paranoid that his enemies were going to attack him during his moment of "weakness," he asked Matthew to perform the surgery. Needing an assistant, Rupert had his men abduct Dr. Leslie Thompkins. Rupert Thorne wanted to have Thompkins killed after the surgery to prevent her from telling anything to the police, but Matthew ultimately went against his brother's orders and helped Leslie to escape from Rupert and both were aided by Batman. Afterwards, Matthew turned himself over to the police. He was later visited by Bruce Wayne who paid his bail. Although Matthew thought Bruce would try to exploit him like Rupert had, Matthew found that Bruce only wanted him to tell him about his father and gladly obliged.

In Batman: Arkham Knight, a lab coat within an office in Elliot Memorial Hospital bears an ID badge with Matthew Thorne's name and face hanging from the breast pocket.

The original Crime Doctor had no super human powers. However, he was a skilled physician and an expert torturer. He sometimes carried an injector gun which could gas opponents to sleep. He also sometimes used a scalpel to assault his opponents. 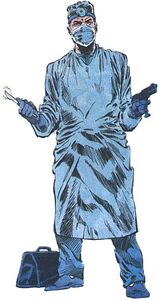 Mattew Thorne
Add a photo to this gallery

Retrieved from "https://villains.fandom.com/wiki/Crime_Doctor?oldid=3325671"
Community content is available under CC-BY-SA unless otherwise noted.