Turn Japan into a crime-filled nation for CRIME.

Thugs
The Crimers are the footsoldiers of the CRIME Organization and antagonists in J.A.K.Q. Dengekitai.

They wear dark purple masks and gray clothing. Among the weapons they wield are Sten Mk.2 Submachine Guns, short swords, grenades, and in rare cases bazookas. They often make the sound "kwee".

The Crimers aided the Crime Organization's Mechanical Monsters in spreading crime all throughout Japan. They participated in a variety of schemes to steal valuables, extort money and commit other acts of crime to meet Boss Iron Claw's goal of turning Tokyo into a city filled with crime. When Crime began using Invader Robots, the Crimers switched their focus to helping Crime deal with J.A.K.Q. and ISSIS, so there would be nothing standing in CRIME's way of taking over the globe.

Several Crimers were part of an army of past enemy grunts that were fought by the Gokaigers in Los Dark's ghost dimension which housed the 1500 spirits of the villains defeated by the Super Sentai. After losing some of their number in an initial skirmish, the remaining members from each grunt group merged to form the Combined Combatant. Though the stronger opponent, the Combined Combatant proved to be unstable due to internal conflicting among the grunts composing him over who got to finish the pirates off. Taking advantage, the Gokaigers used the Battle Fever J Ranger Keys to destroy the Combined Combatant with the Penta Force cannon. 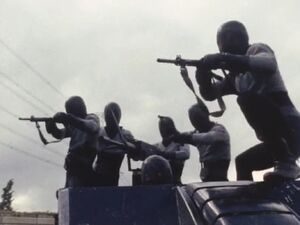