Criminals
The Criminal Organization Crime are the main villains of J.A.K.Q. Dengekitai. They are an international crime syndicate simply known as "Crime" that sought to become the world's largest crime family. Crime was lead by Boss Iron Claw and based in Crime Fortress Island. With a network of wealthy and influential sympathizers and employing an army of faceless, leather-masked thugs and robotic assassins. Crime launched a number of spectacular and elaborate schemes to loot, kill, plunder and obtain absolute power. It is later revealed that Crime was in fact a cover organization for the alien entity Shine, who had sought to world domination.

CRIME was originally created by Shine to serve as front for his takeover of Earth. Shine appointed Boss Iron Claw to serve as a figurehead while he controlled the organization from behind the scenes. Under Iron Claw's leadership, CRIME began a campaign to take over Japan and turn Tokyo into a city rife with Crime. However, Iron Claw and Crime were opposed in their ambitions by J.A.K.Q., a special task force of humans remodeled into cyborgs assembled by ISSIS.

After the failures of Crime's Mechanical Monsters to defeat JAKQ, Shine informed Iron Claw that their "test run" was over and sent his Invader Robots to replace the Mechanical Monsters of Crime, directing Crime's focus away from spreading crime around the world and towards eliminating the two obstacles that stood in his way of world domination - JAKQ and ISSIS. Shine would eventually direct Iron Claw to begin work on his ultimate plan, Operation Stardust, a scheme to use rockets attached to the side of the Earth to push the Earth out of its orbit and into the Shine Galaxy, where Shine's people could colonize it. He sent the Super Cyborg Great King Icarus to oversee the plot, but Icarus was later executed by Iron Claw for being cowardly. Shine then sent Iron Claw to Japan to deal with JAKQ and ISSIS. However, while Iron Claw was battling Big One, JAKQ stormed Crime Fortress Island, defeated Shine and destroyed Crime's base. J.A.K.Q. then returned to Japan and helped Big One to defeat Iron Claw, causing CRIME to dissolve.

Iron Claw returned very much alive with the Crime Big Four, now leading the remnants of Crime and the Black Cross Army. The revived Crime and the Big Four was engaged over the world in skirmishes against several superheroes, General Sahara was fought by the Himitsu Sentai Gorenger in the Sahara desert, Hell Boxer was fought by Kikaider in Mongolia, the Iron Mask Battalion was fought by Kamen Rider V3 in Europe, while Kamen Rider Amazon continued his fight in the Amazon rainforest.

They caught J.A.K.Q. off guard while investigating the Big Four's UFO in the Sky Ace. Crime's plan was to use the "Citybuster" bombs on the United States, the Soviet Union, the People's Republic of China, France, the United Kingdom, West Germany, and Japan, wiping out humanity while Iron Claw and his forces retreated into space via a UFO before returning to Earth and conquering it. J.A.K.Q. learned of Crime's "Citybuster" project and the location of the syndicate's island base. Managing to infiltrate Crime's base, Spade Ace and Heart Queen learnt of Iron Claw's plan. After saving Momorenger, Ace & Queen escaped the base but were surrounded by the Big Four and their armies before Clover King, Dia Jack and the other Gorengers appeared and saved them. Both teams gone on to defeat the Crime and Black Cross armies and the Big Four combined to form the super cyborg "Big Four Robo" who overwhelms both teams until Big One arrived and the two teams combined their attacks to destroy it. Iron Claw then retreated in his UFO and began to activate the "Citybuster" bombs until his UFO self-destructed, finishing him off for good. It turned out that Big One switched Iron Claw's hand with a remote controlled one that Spade Ace used to detonate the "Citybuster" bombs, destroying the craft and Iron Claw with it.

Crime Fortress Island is an island off the coast of Japan's archipelago which has been converted into a secret base for CRIME. It serves as the epicenter of CRIME's criminal network throughout Japan, and is where Iron Claw meets with various Crime Bosses to plot various criminal schemes. The tallest mountain of the island is capable of opening up to release Devil Shark Fighters.

It was later planned by Shine for Crime Fortress Island to be converted into the site of the Stardust Plan, which would see several massive rockets being attached to the island that would be used to push planet Earth out of the Milky Way and into the Shine galaxy. However, as CRIME was defeated before the rockets could be constructed, these plans never materialized.

Devil Shark Fighters are the aerial fighter jets used by CRIME for air combat. They fly using disc-like wings and are piloted by Crimers. They mainly attack by using a three-pronged missile launcher equipped to their noses to fire at their opponents.

They are sent out from a hangar below the central mountain of Crime Fortress Island and are typically used by CRIME to carry out air strikes against targets, as well as battle the JAKQ team in their Sky Ace jet. They are typically deployed in groups of five.

The Crime Monsters are the monsters of Criminal Organization Crime in J.A.K.Q. Dengekitai.

Early monsters, they appear from episodes 1-22.

Second class of monsters, from episodes 23-35. 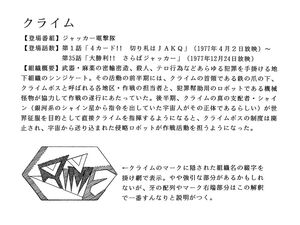 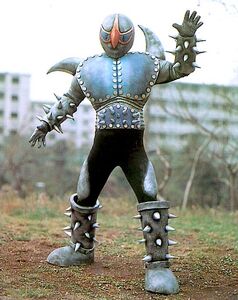