The Order of the Crimson Circle

Lord Vladimir (founder and only Patron)

The Crimson Circle is the name of a cult of hemomancers and a villainous faction in the fantasy MOBA videogame series League of Legends.

An organization that studies the terrifying blood-imbued sorcery of the Darkin, the Crimson Circle is a society of youths that answer to the whims of Lord Vladimir, their Patron and mentor. The cult remains influential in Noxian society for their unique abilities, which the empire has now weaponized with the resurrection of Sion.

As a young prince in southern Valoran, Vladimir began as a mere mortal, but believed himself to be worthy to study the art of hemomancy from the Darkin. The prince's devotion and arrogance impressed the Darkin who ruled over the land, and for his own amusement he took Vladimir under his wing as an apprentice and enforcer. When the Darkin eventually fell, Vladimir was the one who killed him, leaving himself the sole user of this terrifying magic.

Now with the power to drain the life from blood itself, Vladimir was able to renew his flesh to extend his lifespan beyond its mortal capacity. An immortal sorcerer, he hid among the Noxian aristocracy, passing his knowledge on to his most loyal and devoted followers. These followers became known as the Crimson Circle, a cult of young disciples dedicated to the personality and blood magic of their patron. 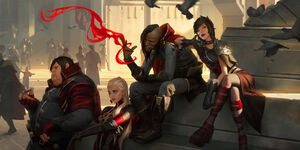 Kye, the Crimson Awakener, showing off his hemomancy. 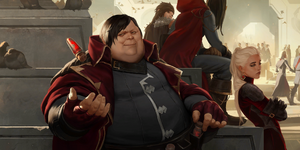 Edvin, the Crimson Curator, tossing a vial of blood. 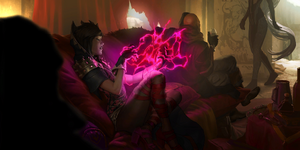 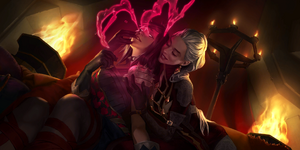 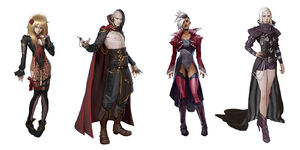 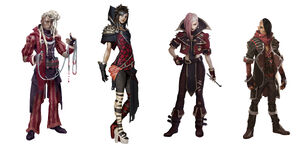 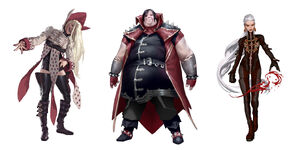