He was portrayed by Alan Legros.

He came into existence, possibly as a manifestation of Mike Carter's emotions of rage, jealously, anger and resentment for his spoiled and bratty younger brother Sam Carter. He was said to be a terrorizing evil clown. A clown who comes to frighten badly behaved children. Then to sometimes takes the most horribly behaved children away.

One day, Mike Carter wanted to buy his mom a birthday present. So he and his younger brother Sam came into an antique shop. There inside the store, an toy antique clown doll was nearby. This is the form he chose as a host. After overhearing how rotten and badly behaved Sam was being (stealing Mike's money that was intended to buy their mom a birthday present, and using it to buy himself a video game).He listened to Mike, when he was trying to scare him. Mike said that a Crimson Clown existed to frighten badly behaved children, and sometimes take them away.

He followed Mike and Sam home, and slowly stalked Sam. First he would randomly appeared in Sam's bedroom, as the creepy looking toy doll. Just the very sight of him scared Sam out of his skin. The results caused him to cry and scream for his brother's help. However, when Sam's brother would come to help him, he would vanish. This made it look like people might think Sam was either crazy or having nightmares.

Later on that evening, he stalked Sam in the living room. When Sam was watching a scary movie. He suddenly stretched his arms out of the television screen. Then he wrapped them around Sam in tight grip. He laughed sinisterly and spoke in a diabolical voice. While laughing, He told Sam how much of a rotten kid he had been. Also that he was soon going to take him away. Sam was crying and screaming for help. But his mom and brother thought he was only scared from the horror movie he was watching.

He next appeared as the creepy small antique doll stalking Sam in his room, but quickly disappeared again. That night when Sam fell asleep he sent Sam to a warehouse in another dimension. He was now over six feet tall and very creepy and even more terrifying looking.

He was now closing in on Sam, preparing to send him away for being such a badly behaved child. He tied Sam onto his bed with ribbons. Then Sam grabbed his skates, and cut them lose and tried to run off to find help. He kept taunting Sam. It  was telling him in a sinister tone that he was so rotten that nobody liked him, nor wanted him around anymore.

Sam was terrified he screamed for help repeatedly but no one came. Then Sam begged him for more mercy and another chance. Sam profusely apologized to him for his behavior. He didn't believe him at first, until after Sam begun to say it with more meaning and sincerity that he realized that he did mean it.

The next morning, he used his powers to alter time. Therefore. instead of making Sam go away, he decided to give Sam another chance. So with time altered, Sam never stole his brother's money. Therefore, they ended up buying their mom her birthday present after all and she had a wonderful birthday. 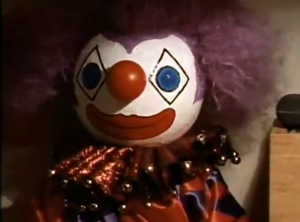 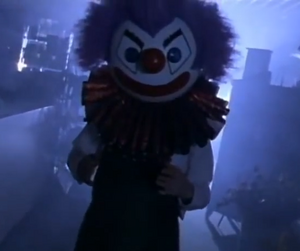 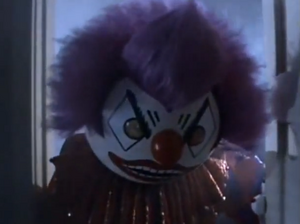 Crimson Clown in 'The Tale of the Ghastly Grinner".
Add a photo to this gallery

Retrieved from "https://villains.fandom.com/wiki/Crimson_Clown?oldid=4102369"
Community content is available under CC-BY-SA unless otherwise noted.