Villains Wiki
Register
Don't have an account?
Sign In
Advertisement
in: Mature, Spoilers, The Boys Villains,
and 35 more

Sell out Soldier Boy to the Russian military with her teammates (succeeded).

She was originally a member of the Vought superhero team Payback and the former lover of Soldier Boy. Due to harboring a secret hatred for Soldier Boy, she and her teammates willingly gave him up to the Russian military, and in the years since Payback disbanded, with the Countess retiring and taking up work at Vought Land as a performer.

She was portrayed by Laurie Holden.

During the 1980s Crimson Countess was a member of the Vought International superhero team Payback (alongside Black Noir, Gunpowder, Mindstorm, Swatto and the TNT Twins) and was the lover of the team's leader Soldier Boy. In spite of that however both she and her teammates hated Soldier Boy for his obnoxious and cruel behavior and as such made a deal with the Russian military to eliminate him from the equation. This came to pass during an encounter in Nicaragua during 1984 as part of a secret government operation known as Operation Charly when Vought sent Payback and Stan Edgar to join Grace Mallory's troops in the effort much to the latter's chagrin.

Thanks to Swatto flying above the tree line, allowing the Russian troops to see him and thus know where the American camp was located they were ambushed and in the ensuing battle Swatto was blown up, Black Noir was greatly injured beyond recognition and Soldier Boy was apprehended by the Russians. To hide their involvement Crimson Countess tearfully ran over to Mallory and told her that Solider Boy was killed with the Russians stealing his body. Following this attack Payback disbanded and all of the members went their separate ways with the Countess eventually retiring from field work and instead working at the theme park Vought Land as a performer who made money from singing to patrons and doing meet & greets with fans.

While she doesn't physically appear in this season she is briefly mentioned as one of the runner ups as the new member in The Seven before losing out on the placement in favor of Starlight.

Crimson Countess first appears in season three when she her performance is watched by Frenchie and Kimiko who pose as fans before trying to interrogate her for information on Soldier Boy's supposed death. She manages to escape the two however in the process accidentally kills a mascot employee at the park. Sometime later she is ambushed by Billy Butcher, Hughie Campbell and Mother's Milk who restrain her, to the latter's disapproval however Billy and Hughie's intentions where in fact to leave her for Soldier Boy who to her horror she now knows is alive. With Mother's Milk dosed with rohypnol and sedated Billy freely makes a deal with Soldier Boy in order for the two to team up and take down both Payback as part of Soldier Boy's revenge and Homelander for Billy's own personal vendetta. As such Soldier Boy confronts his old lover and she tearfully reveals the truth to him before the latter uses his abilities to fry her where she sits, killing her and reducing her body to nothing more than a charred skeleton.

The Crimson Countess was a charismatic and energetic superheroine who appeared to enjoy her job and time in Payback, however she harbored a secret hatred for her lover and team leader Soldier Boy showing herself underneath to be more vindictive and stressed than she first appears. Unlike most Supes however she appears to be genuinely nice, in particular to her fans who she actually appears to enjoy interacting with, she also is obsessed with apes, especially chimpanzees and expresses her adoration for them at multiple points.

Perhaps the Countess' biggest flaw however would be her apathetic and careless demeanor when using her abilities, resulting in needless deaths at her hands such as Grace Mallory's soldiers.

Crimson Countess has the appearance of an attractive, tall, middle-aged woman with pale skin and blue eyes, she had short ginger hair styled into a shoulder-length asymmetrical bob and wore mostly subtle makeup with the exception of her prominent red lipstick and eyeshadow. She wore a long-sleeve maroon bodysuit with crimson accents alongside matching boots, shoulder & neck guards, a mid-length cape and a domino mask.

In a flashback sequence during the 1980s during Payback's prime Crimson Countess looked mostly the same although had longer, wavy hair. 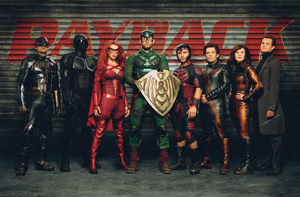