A millennium ago, as a young mage, Crimson Mage (Azaziah) stole a magic globe from "the three demons," and it's power became his to control. For centuries its magic sustained him, and he became the most powerful mage in the world, working alongside at least one king.

Slowly, but surely, the globe's brilliance began to fail. As it was the link to his centuries-long life, Azaziah knew that when it died, so would he. He knew that if he were to survive on through the ages, he would have to find some immortal creature, a demon perhaps, with whose existence he might forge an everlasting eternal bond. Azaziah took up residence at the old Perkins farmhouse "near Hightower." As Azaziah Hornsby (possibly his real full name) he became well known with the locals as a hermit/"harmless old coot".

The globe revealed the Ghost Rider to Azaziah, and he knew he had found the perfect vessel to host his spirit. However, he also realized he couldn't possess the Ghost Rider aka. Zarathos while he was bound to Johnny Blaze and so plotted to separate the two.

His scheme for stealing the spirit eventually became easier when he manipulated a bunch of thugs whom targeted by Ghost Rider to lure him into a trap in form of a specialized pentagram. The plan works, where Johnny Blaze was stripped from Zarathos by the pentagram and the process also caused the freed demon taking form of Johnny Blaze's Ghost Rider form. But Zarathos goes for rampage for celebrating his freedom from Johnny's body, prompt the man to chase him down. From there on, Azaziah goes to observe Zarathos and wait until the demon lower his guard and absorb him for himself.

The damage from the fight between Johnny and Zarathos caused Johnny to wrongfully arrested by the police. To make matter worse, Johnny would weakens everytime he and the demon separated in considerable distance. Realizing that Crimson Mage was responsible for the separation (as he was seen observing him dragged by cops), Johnny escaped from custody and goes for confronting the sorcerer to demand him for undo what he did just as dawn comes and looking for proper incantation to reap Zarathos to his body on his magic book. A brief fight ensues, where the sorcerer tries to blast Johnny with energy beams. Realizing that his powers came from his crystal ball, Johnny tossed a rock onto Crimson Mage's crystal ball, shattered it. This resulting the evil sorcerer immediately weakens and died with his body reduced into dust.

Though horrified that he wind up killed him, Johnny notices his magic book and found the pentagram trap spell that he used to separate him and Zarathos. With the said book, he create another pentagram trap that he successfully used to bound Zarathos back to him, eventually become Ghost Rider once more.

He is a sorcerer whom obsessed with immortality, where his first successful attempt to gained immortality was by stealing the three demons' power globe that later revealed only giving temporal immortality until it's powers fade and later, tries to steal Zarathos from his current host's body.

The Crimson Mage was a powerful magician, though his power waned in his later years. He was however, still capable to perform powerful spell in form of pentagram trap that can separate the bond between a man and a demon whom residing within the man. 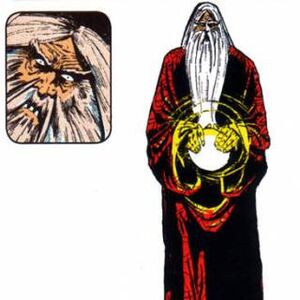 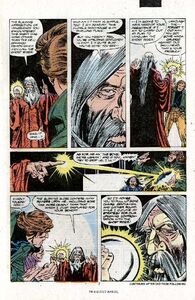 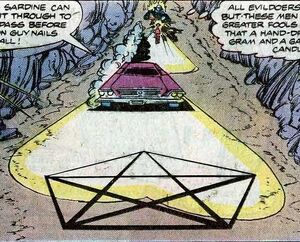 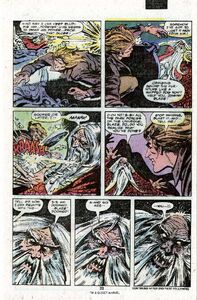 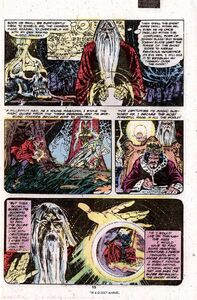 Crimson Mage's past and motives that led him to stealing Zarathos from his current host Johnny Blaze.