Monty Python's The Meaning of Life

Plunder, destroy every skyscrapers owned by American bankers and investors.

The Crimson Permanent Assurance is an antagonistic organization in the movie Meaning of Life.

In the bleak days of 1980, as the movie narrates it, the Crimson Permanent Assurance had fallen on hard times. And is taken over by large, American company, which forces the workers to work extra hard.

When one of their bosses tells an Assurance worker he is sacked, the elderly men working as bankers cannot take such intolerance any more and rebel, ganging up and imprisoning the bosses in their safe. Then the bankers start mobilizing themselves into a pirate society, telling their servants: "To the rigging, to the deck, and you - put the kettle on!" Then, the men climb out of their office onto the walkways, knocking workers to their deaths, and at the top of the office, they order "Weigh anchor!" To the astonishment of bankers on the street, the pavement cracks as a huge anchor comes out of the street. The Assurance offices move off much like a bus into the sunset and plunder businessmen.

In their first successful invasion, they come to a city, rich with investors. The Assurance men fire cannons, (paperwork drawers) and swing in through the windows to attack. The investors, who have been at a conference about the Meaning of Life, are shocked at the intrusion, and many of them run out the room, but the ones who remain are cornered by the bankers. The Assurance attack the men and kill them, and the last man left says "Sh*t!" and jumps out the window. The Crimson Permanent Assurance then cheer at their success, and, heightened by this, go on to destroy and plunder every skyscraper they attack.

As the Sun sets slowly in the West, the fruits of their labour become apparent, as once mighty financial giants lie in ruins. The Crimson Permanent Assurance continue their thievery, but then apparently fall off the edge of the Earth as "certain ideas about the shape of the world were proven to be disastrously wrong."

Despite their apparent demise, they reappear later in the movie, attacking the same businessmen at the conference. The attack goes as before, except the narrator comes in and apologizes for the brief attack by the supporting feature, except this time he is prepared for it, and drops a tower block on the Crimson Permanent Assurance building, presumably killing them for good. 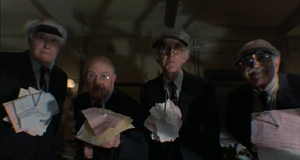 The Crimson Permanent Assurance
Add a photo to this gallery
Retrieved from "https://villains.fandom.com/wiki/Crimson_Permanent_Assurance?oldid=3642185"
Community content is available under CC-BY-SA unless otherwise noted.