Exterminate the Human Race and take over Earth (failed).

Alien Imperialists
The Crisis Empire (in Japanese: クライシス帝国) are a group of alien invaders and the main antagonists of the Japanese television show Kamen Rider BLACK RX.

The Crisis Empire's homeworld is slowly dying due to rampant pollution and environmental destruction. Thus, the Crisis Empire seek to conquer the planet Earth and genocide all human beings so they can claim it for themselves. They justify their invasion by stating that humans do not really care about the Earth and the Crisis Empire will take better care of it. They are opposed by Kotaro Minami aka Kamen Rider Black RX.

The Crisis Empire invaded Earth seeking to turn it into their new planet after their own homeworld was ravaged due to pollution. At the start of their invasion, they identified Kotaro Minami / Kamen Rider Black as the only obstacle in the way of their conquest and abducted him and threw him into the sun in an attempt to him. However, Black was instead empowered by the sun's energies and transformed into Black RX, with his bike Battle Hopper being reborn as Acrobatter.

Dissatisfied with the lack of progress General Jark was making in the Earth invasion, largely due to Black RX's interference, Grand Lord Crisis dispatched Colonel Dasmader to check up on the invasion. Unbeknownst to Jark and the crew of the Crisis Fortress, Dasmader was in fact being possessed and controlled by Crisis personally. After Jark's continued failures against Black RX, Crisis mutated him into Jark Midler and sent him out in a final attack against Black RX. Along the way, Jark Midler murdered the parents of the Sahara family, whom Kotaro was staying with, before finally being destroyed by Black RX.

In the final battle, after receiving help from the 10 Legendary Riders that came before him, Black RX stormed the Crisis Fortress, defeated Dasmader and finally faced off against Grand Lord Crisis himself. Crisis revealed to Black RX the origins of the Crisis Empire and proclaimed that the cause of their planet being ruined was the evil created by humans. However, Black RX rebuked the Grand Lord's accusations, stating that it was Crisis' own policies that polluted his planet before finally destroying him and ending the threat of the Crisis Empire.

The Crisis Empire exists in an A.R. World, the World of Black RX, where it is fought by an alternate Kamen Rider Black RX.

However, Black RX teamed up with the A.R. Kamen Rider Black from the World of Black to help Decade and his friends stop Dai-Shocker. Schwarian was destroyed by Decade Complete Form with the aid of Agito Shining Form while Apollo Geist fled to another A.R. World, the World of Amazon. 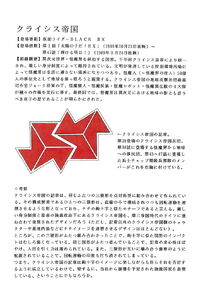