Shooting anesthetic barbs from their body

Eat everything to ensure their species' survival. (ongoing).

The Krites[1] (also spelled Crites), better known as the Critters, are a hostile alien race and the titular main antagonists of the film series with the same name.

In the first film, there were only 8 Critters (there were 10 at one point, but they were so rapacious that while on their way to Asteroid prison their escorts had to kill two of them in order to make their provision last longer) but in the second film, there are possibly half a hundred that form an entirely large rolling ball to go faster into feasting on humans.

On October 22, 2018, it was announced that SyFy (originally known as Sci-Fi) was in talks to acquire the rights to the movie Killer Klowns from Outer Space and the Critters film franchise in order to produce new sequels to both properties.

In the first film, their vocal effects were provided by Corey Burton who also provided the voice of Reverend Henry Kane in the last two Poltergeist films.

The Krites are small aliens resembling porcupines or hedgehogs. They have large rotund bodies, covered in a haze of black fur. In the first film, the Krites' fur is styled so that their stomach is shown, but in subsequent films, it too is covered in fur. They have small limbs, with tiny claws on both hands and feet. They have large mouths filled with multiple rows of sharp teeth, which they use to attack prey. Their nose is wide and flat, and they bear signature red cat-like eyes, which sometimes appear florescent from a distance. The Krites appear slightly larger in each sequel, and their fur appears more wild and spiky, as opposed to slicked back in the first installment.

They've been described in various ways, such as being like rats, possums, Tasmanian devils, badgers and porcupines. Certain Krites have various unique features in the context of the film. For example, a Krite in Critters 3 rolls in some bleach, burning its face and bleaching part of its fur white. A Krite in Critters 2: The Main Course has its hair shot off by one of the bounty hunters, which is repeated in Critters 4 on the lead Krite.

When first born however, Krites are understandably much smaller when fully grown. In order to grow, a Krite must feed at least once. If a Krite feeds enough it may reach large sizes.

Krites behave mischievously, but have a vicious appetite that makes them deadly when hunting for food. Generally, Krites will attack in packs and one single Krite will initiate the attack, while others attack afterwards to bring prey down. In order to travel, Krites can walk, but will commonly tuck into a ball (like hedgehogs) and roll. While rolling, they can gather momentum enough to 'launch' from a position and reach quite long distances.

If they encounter more than one human, or they feel sufficiently threatened (such as a lone Krite encountering humans) they will generally shoot poisonous barbs that can knock out targets until the barb is removed. It is notable that in Critters 4, the Krites do not utilize their poisonous barbs.

In terms of intelligence, the Krites are more than capable to work together in order to get to their prey. In Critters 3, the Krites formulate a plan to gain access to a room through the ventilation ducts. Later on, they also deduce that they can use the elevator shaft in order to get to the humans near the roof. In Critters 2, when the Krites are trapped in a burning factory, they utilize a defensive mechanism in which the Krites combine into one single large Krite ball. This mechanism is used earlier in the film, although on a smaller scale, using four Krites. In Critters, it is apparent that they can perfectly work a spacecraft and even maliciously destroy a farmhouse using the ship's weapons. In Critters 4, the Krites reroute the crew's ship to go to Earth, and they also utilize a growth accelerator in order to rapidly breed more offspring.

In the first film, one particular Krite gets bigger (via eating), until it towers over the humans themselves. This feature was dropped in the sequels, but since the Krites of the first film were clearly older than the younger ones of the sequels, it may be a feature of maturity.

Also, when the humans were using guns to kill the Critters, there was another communication that was seen between 2 Critters.

Critter 1: They have weapons.

The Critters in the 1st film were killed off by a bomb explosion by the two bounty hunters who were tracking them down on Earth. You can hear a Critter say in English, "Uh oh" before all the Critters were killed.

In the second film, after getting the top of his hair shot off, one Critter looks in the mirror and sees his reflection, remarking "Bitching!".

The Critters make a mess in the hamburger shop. The creature's diet is mainly carnivorous (but somewhat omnivorous), as they raid a hamburger shop and eat up the meat in the store. They like to eat people and animals and will stop at nothing to get them, they often hunt in packs and usually strip their victim to the bone if they have enough time to do so.

Critters can roll into balls like hedgehogs, and roll off, climbing and leaping from one area to another, can shoot poison quills that knock out their victims, have many Crites come together to form a huge Critter ball, and anything else. 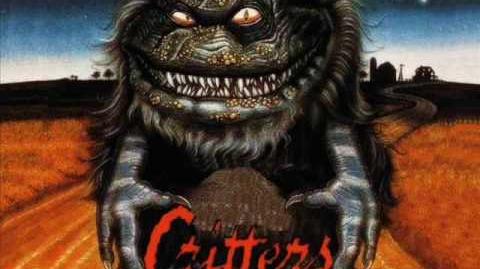 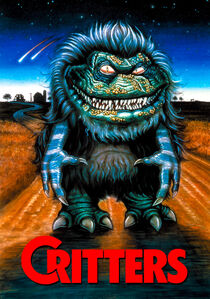 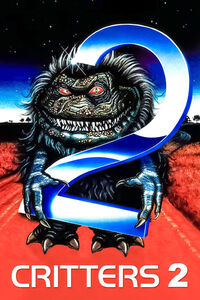 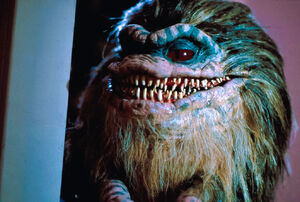 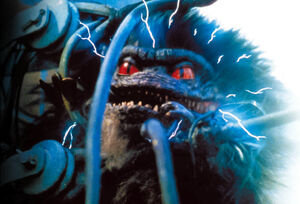 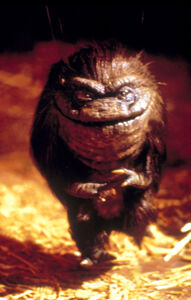