Sir Crocodile, also known as Mr. 0, (サー・クロコダイル, Sā Kurokodairu) is one of the major and also, the longest-running antagonist in the anime and manga, One Piece and the main antagonist of the Alabasta arc as well as the Alabasta saga as a whole. He was the president of a secret crime organization called Baroque Works and is a former member of the Seven Warlords of the Sea (called the "Shichibukai" (七武海, Seven Military Seas) in the Japanese versions). After he was defeated by the series protagonist, Monkey D. Luffy, he was arrested and sentenced to life imprisonment in Impel Down, a maximum security prison known for being inescapable. He recently was able to escape, however, with the help of Luffy and several other prisoners from Impel Down. After Marineford, he travels to the New World with his right hand man Mr.1.

He is voiced by Ryūzaburō Ōtomo in the Japanese version, and John Swasey in the English version.

When he was first introduced, Crocodile was planning to use Baroque Works to stage a faux rebellion and conquer the desert kingdom of Alabasta. His true motive for doing this was to gain access to the poneglyph, special hieroglyphs, that lead to the location of Pluton, a powerful battleship said to have enough power to conquer the world. However, he was betrayed by his former partner, Nico Robin, and was defeated by Luffy. As a result of his true identity being revealed, the World Government stripped him of his title and sent him to Impel Down.

Later on, when Luffy broke into Impel Down to rescue his brother, Portgas D. Ace, he ran into Crocodile, and while he was still angry at him for what he had done, Luffy let him go after Emporio Ivankov insisted since Ivankov knew enough of Crocodile's secrets from his past to help keep Crocodile in line. Crocodile helped Luffy and the others escape from Impel Down but Crocodile only agreed to do this because he wanted to kill Whitebeard, the strongest pirate in the world during the Marineford War. However, during the war he lost interest in killing Whitebeard and even saved Luffy and Jinbe from Akainu. After the war, Crocodile and Mr.1 planned on traveling to the New World.

Crocodile ate the Sand Sand Fruit (Suna Suna no Mi), and is able to turn his body into sand as a result. Not only that, but he can also manipulate sand around him to create sandstorms or fissures, as well as extract the moisture from people and objects, turning them into sand. This is accomplished by touching the object or person with his remaining hand. Like other eaters of the Devil Fruit, he cannot swim and loses his powers when immersed in water or touched by seastone, but another unique weakness is that he loses his ability to turn into sand when he is soaked in water or is touched by something soaked in water. The same also applies to other fluids as they solidify the sand (i.e., Luffy was able to fight Crocodile using his own blood).

Crocodile also has a large hook made of a hard gold alloy, which he can use to slash and stab opponents. The golden part of his hook can be taken off to reveal a poisonous hook underneath. Should that hook break off, he also has a knife concealed underneath the hook. 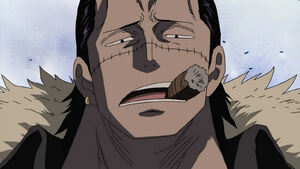 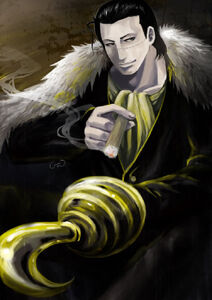 Retrieved from "https://villains.fandom.com/wiki/Crocodile_(One_Piece)?oldid=3460996"
Community content is available under CC-BY-SA unless otherwise noted.