Antagonizing Akko and Ursula
Performing experiments behind everyone's back.

Claim Grand Triskellion for herself with any means necessary, even if it means rid of anyone who stands on her way including Akko and her former best friend Ursula/Chariot(succeeded, formerly)

Be the world's greatest witch.(formerly)
Aid Akko and her allies to destroy Noir Rod(succeeded)
Find the way to break Wagandea's curse (ongoing)

Crippling the magical powers of others

Croix Meridies (in Japanese: クロワ・メリディエス, Kurowa Meridiesu) is the former villain turned anti-hero of Little Witch Academia franchise, serving as the main antagonist of its 2017 TV Series adaptation of the same name before being replaced by her creation Noir Rod as of third and fourth parts of the four-parter second cour finale (second season on Netflix).

She is a former friend of the main protagonist Atsuko "Akko" Kagari's teacher and mother figure, Chariot du Nord (currently known under alias Ursula Callistis), who previously helped her in searching for the Seven Words of Arcturus, but grew spiteful towards her over not being chosen to wield the Shiny Rod. Her resentments from the deep-rooted disapproval of what happened back then ultimately saw her tricked Ursula to employ sinister spell called Dream Fuel Spirit on her spectators (where young Akko and Diana happened to be two of them) as early steps of her Noir Fuel Spirit plan to unlock the Grand Triskelion with her own way, crippling their magical powers in the process and caused their friendship ended by that point.

Ten years later, she returned to Luna Nova, having developed magitronics to help improving her former academy's life standards with her techno-magic skills so she could continue what she started there, directly responsible for many misfortunes and problems that protagonists faced in her pursuit of that goal. Yet, despite how far she had fallen to the point of Chariot initially believed her former best friend had since beyond hope of salvation, Croix turned out still able to go back as her fall from grace was the result of Woodward's both jaded nature and negligence towards her all along. Coupled with seeing how much her friend still cared with her and understanding errors in her way, Croix eventually decided to atone her misdeeds starting from helping the gang destroying her out-of-control creation and later, finding the way to break Wagandea's curse.

She was voiced by Junko Takeuchi in the Japanese version, and Caitlyn Elizabeth Muncy in the English version.

Croix is a young woman of tall stature with white skin complexion. Her eyes are aqua, which she paints with a dark pink eyeshadow. Her wavy lilac hair is slicked and styled into some sort of short mullet with a lock that covers her left eye. After getting beaten up by the noir rod, her hairstyle unravels, becoming a bit messier and her forehead is covered by her bangs.

She wears a suit that covers her body with a neck that reaches the height of her ears. She has a brown leather saddlebag, a large cape, and high-heeled boots. Sometimes as a student Croix wore her hair long and had glasses, an inversion of Chariot's (whose hair was originally short and who started wearing glasses) disguise as Ursula. However, Croix kept her original hair color.

Croix is a highly logical and charismatic witch who can remain uncannily cool under pressure no matter the situation. Back in her school days, she was once a timid and reserved, yet kind and considerate close friend to Ursula aka. Chariot. While dismayed that both Shiny Rod and her dream to obtain Grand Triskellion ended up on the latter's hands, Croix nevertheless reassured Chariot that she indeed worthy and will support her the best she could. Sadly, her inability to let go whatever resentments that born from the Rod's rejection, coupled with Woodward's negligence towards her and Chariot's apparent lack of focus in their quest, eventually consumed her and turned her into bitter, selfish, and calculating person who forcefully played her role in her stead by bypassing the traditional ways of opening the Grand Triskellion, even if it meant she had to betray Chariot by tricking her to employ Dream Fuel Spirit on innocent audiences including young Akko and Diana as part of the said scheme and ended their friendship in process. Croix's descent into villainy from that point also saw her committing a number of fairly horrific deeds with utter lack of hesitation nor remorse, such as nearly ruining the bonds between Akko and Chariot, harming innocent people as part of her Fuel Spirit experiments, coming close to sparking a potential all-out war between England and its rival nation just to activate Noir Rod. In addition of this, she displayed utter lack of hesitation to kill or at least demoralize those who stood in her way.

Despite how different her adult personality seemed to be, her concern in Chariot's well-being despite their feud and later, remorse following the fallout with Woodward as well as discovery of Grand Triskellion being not like what she perceived to be, proved that Croix still has what remains of her past self. Her entire actions revealed to partly motivated by the desire to gain Woodward's approval, only to ultimately expose the ancient witch's true color as detached and jaded person who concerned more with the restoration of magic in the world above all else along with perceived favoritism to Chariot for the same reason in the end. This ultimately redeemed Croix before Chariot's eyes, who then fight to protect her from her then out-of-control Noir Rod despite her pleads to save herself and everything she had put Chariot through.

After helping the gang stopped Noir Rod and reviving Yggdrasil at the same time, Croix, having comes full circle from being the first person to espouse the importance of believing in one's magic to being reminded firsthand of why such sentiment was correct all along, eventually reverted to her original kind and considerate self, promising to Chariot to find the way to break Wagandea's curse as the first step of her atonement. Overall, she proved herself as both a dependable ally at best and terrifying adversary at worst for Chariot.

Her first name, "Croix", taken from "Croix du Sud" (French term for the Southern Cross constellation), is the French word for "cross". Meanwhile, her surname, "Meridies", is the Latin word for "noon" and "south". Thus, "Croix Meridies" can be translated as the Southern Cross constellation. This both a reference to the similarly named antagonist group from Inferno Cop, a previous work by Trigger, and Croix's position in the final of an anti-villain. 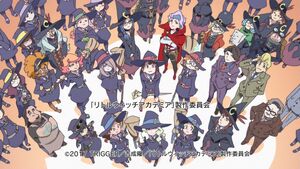 Croix appearing in the main credits for the show. 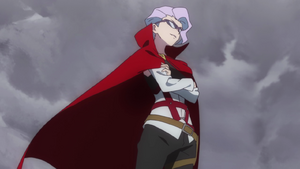 Croix during Skirmish at Wagandea in Episode 21. 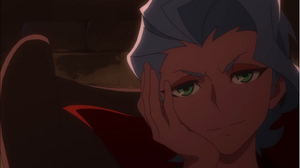 Corix's breakdown with not only Grand Triskellion was not like what she wanted, but also her Noir Rod ended up mutated into a monster worse than her.

A flashback of Croix and Chariot when Shiny Rod going to choose either her or Chariot. 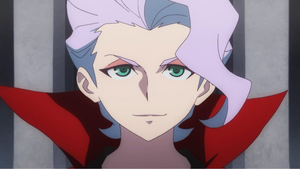 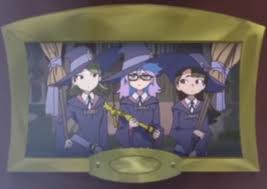 Croix in her school years. 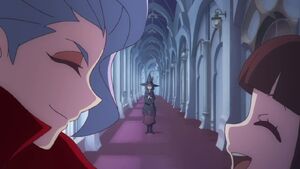 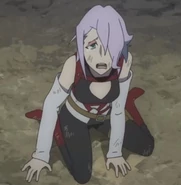 Croix's moments of defeat as she was shocked that Ursula still protecting her even after various incidents and battles she instigated. 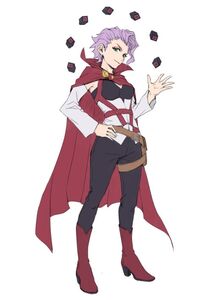 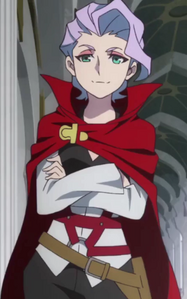