The Secret of Kells

Devour all who enter its domain

Crom Cruach is the overarching antagonist of the 2009 French-Belgian-Irish animated fantasy film The Secret of Kells. It is said to be an animated re-imagining of an old Irish pagan deity linked with sacrifice.

Crom has a distinct art style in comparison to the rest of the movie. Its jointed appearance is based on old Celtic artwork, with depicted dragons much the same way. It appears as a large, blue, watery serpent, the Eye of Crom in its forehead, with a layer of teeth stretching from out of its mouth and multiple serpentine tongues. Crom's appearance reflects that of undersea animals.

Crom lives in a hidden cave in a forest outside Kells, stained with blood from previous sacrifices. The realm it lives inside appears similar to a vast space of water, further owing to its marine appearance.

Crom appears to feel little but a brutal instinct to eat, as shown in it attempts to devour Brendan when he intrudes on its lair and when blinded, eats itself as it cannot find anything to snap at.

An unspecified time before the plot, Crom Cruach was responsible for the deaths of Aisling's race, including her mother and leaving her as the sole survivor. Later, Brendan, an Irish boy, begins a quest to complete the Book of Iona and meets Aisling on his journey. To complete the book, Brendan required the Eye of Crom, one of God's eyes and a jewel embedded in the monster's forehead. Aisling recognizes the symbol of the Eye on his hand, and warns him not to go, tearfully relating her past to him. Yet, Brendan persuades her to open the way to Crom's lair. Though it costs Aisling's human form, Brendan is allowed entrance to Crom's cave, and is drawn into a glowing crack in the floor.

Now trapped in the cave and floating in an unearthly realm, Crom reveals itself and attempts to devour the intruder. Though at first he flees, Brendan eventually confronts the beast and traps it within a circle of chalk. Seizing its head, Brendan rips out its Eye and retreats. Blinded, sealed, and unable to lunge at anything but itself, Crom flies into a blind fury and devours itself. 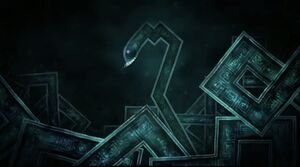 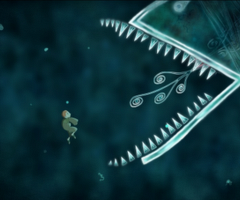 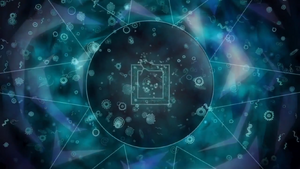