Villains Wiki
Register
Don't have an account?
Sign In
Advertisement
in: Demon, Deities, Villains of Folklore,
and 8 more

"Crooked and Bloody" (English translation of the said Irish name)

Granting wishes to mortals in exchange for sacrificial offerings.

To keep power via sacrifice and worship.

Crom Cruach is a figure in Irish mythology who is imagined as an ancient fertility deity and later, as a demon who confronted St. Patrick and was subsequently banished by the said Saint. Being a pagan fertility goddess, Crom Cruach grew to be associated with human sacrifice.

Its name is roughly translated as "crooked and bloody", which further grant the entity a malicious reputation in the modern age.

According to one tradition, it was the mother of Satan.

Prior to St. Patrick's arrival, the ancient Ireland was said to be ruled by the Old Gods, one of which was the fertility goddess known as Crom Cruach. It offered good yields of milk and grain to its worshipers in exchange of first-born sacrifices, and is said to have been worshiped since the time of Érimón, which is around 1287–1286 BC.

An early example of Crom Cruach's cruelty was the death of the early High King, Tigernmas, along with three quarters of his army, died while worshiping the said deity on Samhain eve, leaving the Ireland without a High King for nearly seven years after the incident. Even so, the worship of the continued regardless across the ages.

Fortunately, Crom Cruach's dark reign meets its end upon the arrival of St. Patrick in his campaign against the Old Gods. In its confrontation against the Saint who located its cult, Crom Cruach emerged with its true demonic form from its gold and silver figure, causing twelve smaller bronze figures to sink into ground. The fertility god soon defeated by the Saint who cast it to hell, ending the practice of human sacrifice on the island.

Crom Cruach was originally envisioned as a wizened god hidden by mists, represented as a gold figure surrounded by twelve stone or bronze figures. The latter depiction was interpreted by some as representing the sun surrounded by the signs of the zodiac, suggesting a function as solar deity. As its image as a god became demonized following the arrival of Saint Patrick, Crom Cruach's depiction warped to that of a demonic snake or monstrous worm (possibly referring to a Wyrm or a Wyvern, a type of dragon).

Being a deity of bloodshed and sacrifice, its previous role as a fertility god often takes second place to these more malevolent aspects of its being, especially after the spread of Christainity and the subsequent cease of Crom Cruach's worship. Even prior to having its image demonized by Christainity, Crom Cruach was already monstrous and cruel to begin with, no better than a demon Saint Patrick perceived it as. 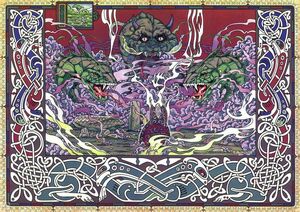 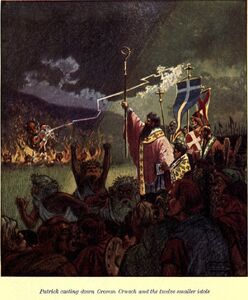 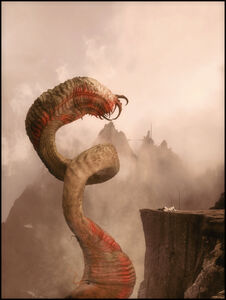 A modern take on Crom Cruach. 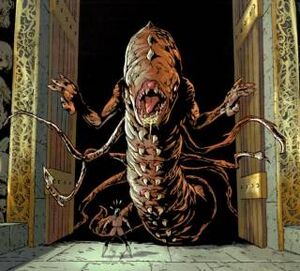