Ruler of the universe (formerly)

Eating (assumingly, as he ate his children, Kratos, and possibly several other monsters.

Prevent his children from overthrowing him.

Kill the Gods of Olympus.
Kill Kratos (all failed).

Cronos is the lord of the Titans and father of the Olympians and the overarching antagonist of the Greek Era of the God of War series. He appears as a major antagonist and boss within God of War III.

Cronos and his fellow Titans were born as the children of Ouranos and Gaia with their birth place being the Island of Creation, home of the Sisters of Fate. They feared the Sisters' power over fate and decided to leave the island to instead rule over the mortal world, beginning the "Golden Age of Mankind". Cronos was their leader, but it was prophesized that he would be overthrown by his own children, something he sought to prevent. He tried bribing the Sisters of Fate by giving them the Steeds of Time, but when this failed, he instead chose to swallow his children whole whenever they were born.

After five of these occurrences, Cronos' wife, Rhea, couldn't bear it anymore and soon it came time for her sixth child, Zeus, to be eaten. However she instead commanded an eagle to take the baby away, beyond Cronos' watchful eyes and wrapped a stone in a cloth, which the Titan swallowed, never knowing the difference.

Battle with his Children

Zeus was raised by Gaia, who nurtured his wish to free his siblings, but unfortunately, Zeus returned to the world, full of vengeance. He decided to bring down all of the Titans and freed his siblings from Cronos' stomach, then engaged in a war against them.

The battle between the Titans and the gods ravaged the mortal world and in their fight, Cronos was almost brought down by Hades and Poseidon. Atlas came to his rescue, only to be brought down by the two himself, though the battle raged on anyways. Eventually the Titans were defeated when Zeus used the Blade of Olympus to banish the Titans to Tartarus, but Cronos would soon be condemned to endure another fate.

Cronos was sentenced by Zeus to wander through the Desert of Lost Souls with the Temple of Pandora chained to his back, until the whirling sands ripped the flesh from his bones. Whenever a warrior blew the Titan Horn, Cronos would come forth to allow them to brave the dangers of the temple with each one failing and getting slaughtered. However Kratos succeeded in getting through and retrieving Pandora's Box and after he opened it, Zeus became consumed by fear and condemned Cronos to the Pits of Tartarus.

Later when Kratos was finding his way through the Steeds of Time, he came across some remnants of Cronos' magic. The image of the Titan appeared before him and explained that before his defeat, he'd hidden away a little of his magic. Cronos then bestowed the magic upon Kratos, giving him the power of Cronos Rage.

After Kratos came to the Underworld seeking the Omphalos Stone, he came across the severed hand of Gaia as Cronos appeared. The former Titan King labeled Kratos as the murderer of Gaia, and explained what had happened to him to make him come to the Underworld. Cronos blamed Kratos for the fate he now endured as Zeus was consumed by fear and banished Cronos to the pits of Tartarus to roam.

The Ghost of Sparta pointed out he'd taken Pandora's Box because the gods had commanded him to kill Ares, but Cronos said he'd only done it to satisfy his need for vengeance. The Titan then proclaimed vengeance belonged to him as he tried to crush him between his fingers, but the Ghost of Sparta blinded him with a Solar Flare. He began fighting his way across Cronos' body, while the Titan tried to crush him, and blow him off of his arm. Kratos managed to rip off one of the Titan's fingernails and climb up his finger. Cronos attempted to blow him off, but Kratos used the Solar Flare to blind him again. He managed to reach the main chain that bound Pandora's temple to the Titan and tried to break it, but Cronos grabbed Kratos and tried to crush him, only for him to force his hand back and stab it with the Blade of Olympus. Enraged, the Titan tried to drop the Ghost of Sparta to his death, but Kratos held on to his hand and reached Cronos' wrist. Cronos clenched his fist, causing Kratos to get pushed forward by the shockwave it generated and managed to grab a part of the chain on the Titan's arm, allowing him to swing up onto his arm. Cronos saw Kratos and attempted to grab him, but the Ghost of Sparta escaped him, resulting in Kratos ending up on his shoulder. While there, he took control of an undead Cyclops, using it to bash a hole open in Cronos' shoulder, but the Titan finally caught Kratos and managed to swallow him.

The Ghost of Sparta slid down the Titan's throat all the way to his stomach, where he managed to find the Omphalos Stone, the stone Cronos believed Zeus was so many years ago. Kratos soon sliced his way out of Cronos' stomach with the Blade of Olympus, making some of his intestines spill out. Wounded, Cronos pleaded for his life as he stated Kratos what he sought but the Spartan ignored his pleas and impaled him through the bottom of his head with part of his shackles.

The Ghost of Sparta finally finished the Titan by driving the Blade of Olympus through his head, but not before Cronos cursed him, calling him a coward who killed who his own family, which was quite ironic as Cronos ate his own children making his remark pretty hypocritical. While Kratos indeed killed his grandfather and sought to kill his father Zeus, Cronos himself imprisoned his children centuries ago making his condemnation ironic. The titan then collapsed to the ground and died.

Cronos possesses an enormous amount of strength and stamina, which can be attributed to his enormous size. As a Titan, he possesses immortality and cannot be harmed by most forms of attack, also his powers seem to revolve around storms and lightning, much like his sons, Zeus and Poseidon. As the father of the elder Olympian gods he is extremely powerful and during his reign as the King of the Titans he could control the sky, sea, and the earth. 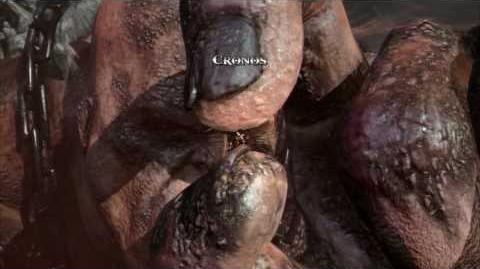 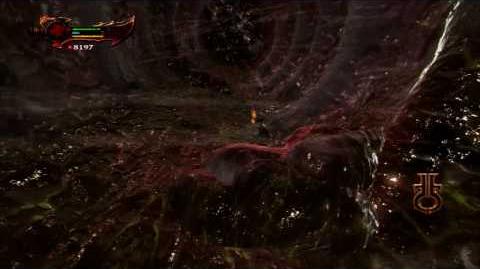