Ruler of the Cosmos

Tyrannical Deity
Cronus is a minor antagonist in the 2001 animated TV series Samurai Jack. The ruler of the Titans and a Greek Titan himself, he first debuted in "Episode XXXIV: Jack and the Swamp".

After his resurrection by Aku, Cronus still has his signature helmet and also the Gems. However, he lacks a face and his beard and mustache, and the whole entire body is instead a galaxy.

Eons ago, prior to the creation of Aku, Cronus ruled the cosmos with the Titans. At some point, he created the "Gems of Cronus",  He then proceeds to consume all of his children so they cannot be able to overthrow him. However, he was defeated by his son Zeus, stripped off of the gems, and was spent the next eons chained to an asteroid forever.

However, he was later revived by Aku after the latter (under the guise of a hermit) had tricked Jack to collect the Gems of Cronus. He now seemed to be obedient to the one who revived him, as he immediately heeded Aku's order to destroy the Samurai. Jack, aware of the deception all along, is able to quickly snatch the Eye of Cronus, which later caused the Titan's body to dissolve and permanently killing him.

Since Jack returned to the past and destroyed Aku, Cronus was probably never revived. 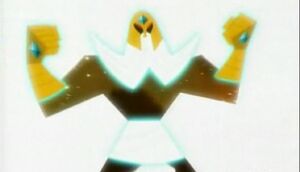 Cronus and his Gems.

Cronus fighting his own son Zeus. 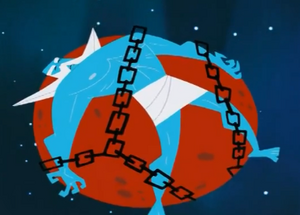