Crooked Man (The Wolf Among Us)

Killing innocent people.
Extorting others into giving him their money or valuables.
Antagonizing and provoking Bigby Wolf.

Get full control of Fabletown (succeeded for a while).

Have Georgie kill Faith and Lily for attempting to escape.
Rat Georgie out to Bigby for the murders (both succeeded).
Maintain his influence within the Fabletown community and cut his ties with the murders Lily and Faith
Escape justice for his crimes (both failed)

The Crooked Man is the main antagonist of the 2014 video game The Wolf Among Us. He is a Fable and a powerful and ruthless crime lord who's influence over all of Fabletown matches that of its government and holds much of its population within his grasp via his enforcements. The Crooked Man is also the first major villain that Bigby Wolf had to face as sheriff of Fabletown. He is Bigby Wolf’s arch-nemesis.

He is a very calm and collected, yet also cruel and manipulative crime lord from Fabletown who causes the events of the game. He runs an extensive criminal syndicate consisting of himself, his right-hand woman Bloody Mary, the pawn shop owner Jersey Devil, the pimp Georgie Porgie, and the Tweedle brothers. He offers loans and illegal magical glamours (Potions that hide the existence of fables to humans) and also runs a strip club and pawn shop. It is mentioned that he killed his own family rather than let them stand in the way of constructing his criminal empire.

He ordered a hit on the game's protagonist Bigby Wolf in an attempted to kidnap the towns mayor, Ichabod Crane. He later spares Bigby's life in exchange for the mayor.

He is mentioned many times throughout the episode by his thugs and finally makes his first appearance at the end of the episode, in his lair with all of his thugs.

The episode begins within his lair, with him being warm and welcoming towards the sheriff. However, tensions quickly flare up between the two, and he offers to give up Georgie Porgie in exchange for an alliance. However, this greatly angers Georgie Porgie and his girl, Georgie asks for assistance against the other thugs but they all back down, showing them to be greatly fearful of the Crooked Man. Eventually, all the thugs get in a fight with Bigby and the Crooked Man and Bloody Mary escape to his limo. He is encountered again at a large foundry after Bigby kills Bloody Mary. A tense standoff occurs between the two due to him holding a gun fully loaded with silver bullets (Which would kill Bigby instantly). The Crooked Man requests he is kept alive and brought to trial, which is what Snow White wanted, depending on the players decisions, he may or may not be brought to the Fabletown Government for a trial.

Bigby arrests the Crooked Man and brings him to the Woodlands for his trial, and is also given the chance to defend himself. Here, the Crooked Man tries to convince everyone that he didn't murder Faith and Lily. Georgie did. However, they continue to charge him with ordering their deaths. While the Crooked Man does well on convincing the jury of Fabletown, he confirmed as guilty for the crime. However, the Crooked Man still tries to rally the jury, saying that he had helped the Fables who couldn't afford Glamours. He also defames Bigby and Snow, by mentioning any way how Bigby had abused his power as Fabletown's sheriff. Furthermore, he also states that if he's on trial Georgie's murder of Lily and Faith. Then Snow should also be on trial for Bigby's murder of Tweedle Dum (if the player chose to kill him). Despite almost having the townspeople convinced, Nerissa arrives and confirms the Crooked Man's crimes towards her and the other prostitutes at the Puddin 'n Pie. As well as that he did indeed order the murders of Lily and Faith. The town are about to sentence the Crooked Man to death, but Auntie Greenleaf interjects saying that they can imprison him to prevent him from doing any harm. Regardless of the choice that Bigby chooses, the Crooked Man tries to strangle him with his handcuffs. Bigby overpowers him, and dangles him over the Witching Well. The player is then given the choice again:

Bigby viciously strangles the Crooked Man and brings his corpse back to the Woodlands, much to the horror of Snow White and most of the resident Fables. While some believed that the Crooked Man deserved to die, others are rightfully horrified and disgusted by Bigby's actions. On top of this, with Georgie dead, he is unable to be brought in for questioning. Snow also chastises Bigby, saying that she can't stop the others from calling for his resignation if he continues to abuse his power in such a way. This escalates into a heated argument about how the sheriff handled things, and if he and Snow are fit to run Fabletown. However, Nerissa shows up and defends Bigby and Snow, while also confirming that the Crooked Man held so many under his influence and fear. This ends with Bigby and Snow being given a chance to prove that things can be run the right way, and Bigby drops the Crooked Man's corpse down the Witching Well. On the other hand, Bigby can cut this short by dropping the Crooked Man down the well and leaving (if the player chooses to do so). 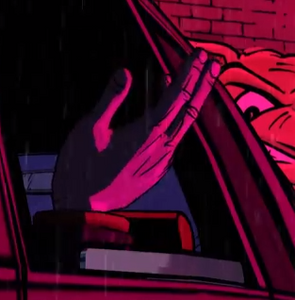 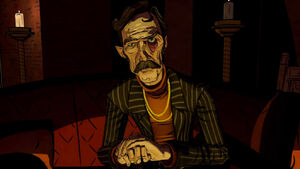 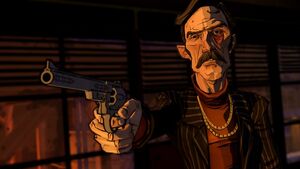 Crooked Man pointing a silver-laden revolver at Bigby, as he explains his plan on Fabletown. 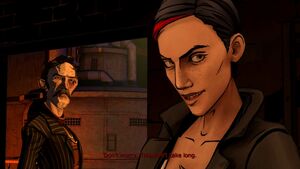 Crooked Man's evil grin as he hears from his right-hand woman Bloody Mary, that she will finish Bigby off quickly, so that he wouldn't get near him. 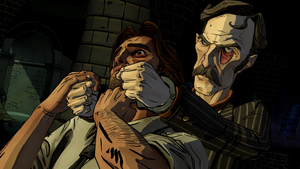 Crooked Man attacking Bigby with his cuffs as he attempts to escape his sentencing. 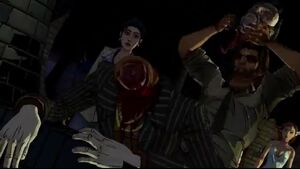 One of The Crooked Man's brutal deaths (player determined); brutally decapitated by Bigby.