Crooler is Cragger's sister and her weapon was a very rare plant called a Persuader Plant that she used on Cragger to control him, she is, in a way, the main antagonist of season 1, a supporting antagonist in season 2, and a supporting anti-villainess character in season 3 of Legends of Chima, as all of Cragger's evil actions were from her manipulation.

She has a selfish personality as she wanted to take over Chima and rule the Chi and she is the crulest of the entire Crocodile Tribe and she seems to hate Plovar.

She is not above betrayel, even to her family, seeing as she worked with the Wolves to steal all the Chi without telling her brother, and she was willing to work with the Spiders to control the Chi when she was supposed to interagte them.

During the first half of Season 1 she was the antagonist as she kept using the Persuader Plants on Cragger and made him do evil things like building a Dam for the Chi Water or build traps for Speedorz Races.

After Cragger was defeated by Gorillas in his own swamp she began to lose faith in Cragger and worked with the Wolves to steal all the Chi during the Speedor Race and she suceseed and began to have second thoughts about her actions.

During the second half of the season she began to loose her footing, seeing as though her Persuader Plants were nearly dead and Cragger's mind was clear, so the wolves took over the role as the main antagonists.

She soon made one last effort to control Cragger, during the peace trearty she threw a root of a Persuader Plant into a fire and created something called Fog Of Destiny, later when Cragger came back under the Fog's spell, Crooler was locked up for the remainder of the season and told Lagravis her story on why Cragger was evil.

She was soon relased by Queen Crunket in Season 2 and tried to convince her mother to keep the Chi and use against the Lions but her mother said no.

She soon tried to work with the Spiders to control the Chi but was trapped by the Spiders and kidnapped Plovar who earlier was trying clean her teeth.

During Season 3 she appeared less of an antagonist and more of anti villain and she soon reforrmed after the Great Illuminatoin.

Crooler wears skimpy and torn, lilac clothing on her waist and chest. Her chest appears to have a bandeau that is torn. A red cloth belt and lilac loincloth extends across her waist and a tail extends down her left leg. A string of pointed teeth is kept to the side of her other leg. 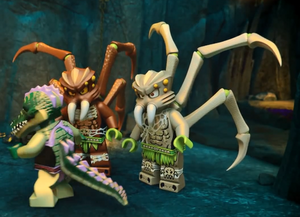 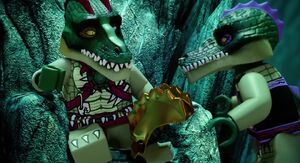 Retrieved from "https://villains.fandom.com/wiki/Crooler?oldid=3546669"
Community content is available under CC-BY-SA unless otherwise noted.