Killing any nearby campers in his pathway.

Seeking revenge upon those who were involved in the prank (failed).

Cropsy is the main antagonist of 1981 slasher film The Burning.

He was initially the alcoholic caretaker of a summer camp, Camp Blackfoot. After a prank set by a group of campers gone wrong, he was heavily burned alive and was sent to a hospital for recovery. When he was released from the hospital with severe deformities from failed skin drafts, he armed himself with a pair of garden shears and sought revenge upon those responsible for the prank.

He was portrayed by Lou David.

At Camp Blackfoot, a group of campers play a prank on Cropsy; during the night they sneaked into his cabin and set a wormy skull with light candle sockets next to his bed. When awoken by the campers banging on his window, he accidentally knocks the skull onto his bed where it ignites his sheets and clothing. Now aflame, he knocks over a gas tank, resulting flames to spread all over his cabin.

They watch in shock as Cropsy, engulfed in flames, stumbles out and falls down into a river, putting out the flames. Five years later, Cropsy is released from the hospital, wearing a heavy coat, sunglasses and hat to hide his deformities. Out of rage, he murders a female prostitute by strangling her and repeatedly stabbing her with a pair of scissors. He then sets out to another summer camp, Camp Stonewater.

Cropsy arrives, now armed with garden shears and nearly attacks a female camper named Tiger, who was searching for a baseball in the woods, but he hesitates to kill her. During one night, camper Alfred spots Cropsy outside of his window and soon disappears, but no one believes him. Later, the kids all go on a canoe trip up the river, in which Cropsy follows them. Cropsy then spies on campers Karen and Eddy, who are taking a skinny dip in a lake.

After Karen reconsiders having sex with Eddy, Cropsy scatters her clothing in the woods. After collecting most of her clothing, Cropsy grabs her and slashes her throat. Later, he releases the nearby canoes adrift into the lake, having everyone think that Karen left and stole the canoes. By the next morning, the camp notices the disappearance of Karen and discover the canoes missing. This results in the campers creating a makeshift raft in order to return back to the camp.

With the raft completed, five campers Eddy, Woodstock, Fish, Diane, and Barbara board the raft and leave back to camp. After paddling for a few miles, they discover the canoe, unbeknownst to them that Cropsy is hiding inside the canoe. When they begin to reach for the canoe, Cropsy jumps out and kills them all with his shears. When jumping out, Cropsy slashes Fish's collarbone, stabs Barbara's back making her fall into the water, cuts three of Woodstock's fingers, stabs Eddy's throat, and finally slashes Diane's forehead.

As night falls, campers Glazer and Sally begin to have sex in a remote area of the woods, unbeknownst to them that Cropsy is watching them behind the bushes. Despite the moments of premature ejaculation, they decide to continue their intimacy. After Glazer leaves to get matches to start a campfire for their intimacy, Cropsy appears behind Sally and forces his shears into her chest. While she struggles against his shears, she is killed off-screen.

When Glazer returns, Alfred awaits behind a tree and watches him. Glazer uncovers Sally, before Cropsy thrusts his shears into his neck and pins him towards a tree. With Alfred witnessing Glazer's demise, he returns and wakes up counselor Todd about the events he witnessed. Todd initially does not believe, until discovering the bodies. While Todd is investigating Glazer's corpse, Cropsy appears and cuts his forehead, knocking him unconscious, and chases Alfred into the woods.

The campers see the raft in the lake with no one on board. Camp Counselor Michelle swims towards the raft and upon discovering it is full of dead bodies, including the corpse of Woodstock with one of his arms severed. With the campers now panicked, Todd tells Michelle to evacuate the remaining campers back to Camp Stonewater on the cleared raft and contact the police while he hunts for Cropsy with a felling axe.

Meanwhile, Cropsy captures Alfred by grabbing his throat beside a wall and brings him inside an abandoned mine shaft. Todd continues to follow and enters inside the mine, where Cropsy has pinned Alfred up to a wall with his shears into his arm. When Todd steps across a track, Cropsy pushes a mine cart down at him, causing Todd to knock aside and crash into a wall, where he discovers Karen's corpse.

Cropsy, now armed with a modified blowtorch functioning as a flamethrower, begins walking towards Todd. Todd soon remembers that he was involved in the original prank. Turning off the blowtorch, Todd continues to search in the area. When finding Alfred, Cropsy appears, now revealing his disfigured appearance, and reactivates his blowtorch against Todd. Just as Todd is cornered from Cropsy's blowtorch, Alfred frees himself and stabs Cropsy with his own shears.

As Todd and Alfred leave the mine, Cropsy reappears and grabs Alfred, before Todd slams his axe into his face, killing him. Before leaving, Alfred uses the blowtorch and ignites Cropsy's clothing, deactivates the blowtorch and make their way out of the mine to Michelle, who brings them to the helicopter and to the hospital as Cropsy's corpse continues to burn.

After Cropsy's demise, many groups continue to tell the story of Cropsy around the campfire. 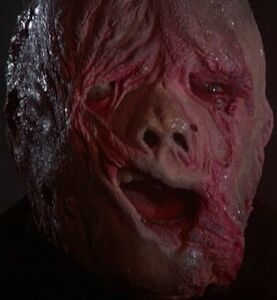 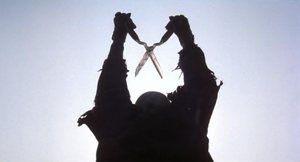 Cropsy raising his shears during the film's raft sequence. 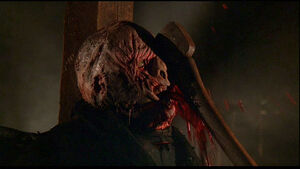 Cropsy's demise at the hands of Todd. 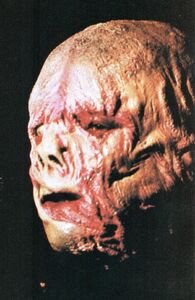 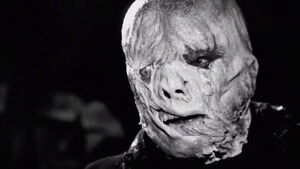