Pokémon the Movie: I Choose You!

Bullying Ash and his friends (formerly)

Cross (Japanese: クロス Cross) is the main antagonist of Pokémon the Movie: I Choose You!. He is a rival of Ash Ketchum and the original trainer of Ash's Charmander (later evolved into Charizard).

At some point in Ash's journey, he and another trainer named Verity encountered a Charmander that was sitting in the rain, which was very unhealthy for a Fire-type Pokémon. Cross then appeared with his Lycanroc and Charmander ran up and gave him a hug, but Cross kicked it away and told him to get lost, which angered Ash. Cross then revealed that he was Charmander's original trainer before he deemed it too weak, but even after disowning it, Charmander continued to follow him, so Cross told it to wait for him on a stump and left with no intention of coming back for it. Ash and co. reprimanded him for this, but Cross insists that a Pokémon's strength is all that truly matters. Ash states that it's a trainer's duty to help it grow strong and that they became friends along the way. Cross, however, claims that friendship only makes Pokémon weak and takes his leave.

Cross was then seen at a library, and overheard Ash, Verity, and a new companion named Sorrel reading about the legend of the Rainbow Hero. He then challenged Ash to a battle and used Inciniroar against Ash's Charmeleon (which evolved from the very Charmander he abandoned). Cross allowed Inciniroar to sustain enough damage to become even more powerful, and then had it utterly defeat Charmeleon. After the battle, Cross then belittled Ash for being friends with his Pokémon, calling him the worst trainer ever and that he will never win.

Ash and co. then make it to Mount Tensei, where Ash planned to use the Rainbow Wing to summon and battle Ho-Oh. However, Cross appears and demands that Ash turn the feather to him, stating that only the strongest should battle Ho-Oh. Ash refuses and they battle again with the same Pokémon as before, but this time, Charmeleon evolves into Charizard and defeats Inciniroar, causing Cross to become despondent.

As Ash walks past him with the Rainbow Wing, Cross claims to have seen Ho-Oh as well, but didn't receive a wing like Ash did. This was what caused Cross to become obsessed with strength and seek revenge on Ho-Oh. When Ash stated that he only became stronger with the help of friends, Cross became consumed in anger and forcibly took the Rainbow Wing from Ash, intending to summon Ho-Oh anyway. But Cross's evil heart causes the Rainbow Wing to lose its color, and when he attempts to use it, it darkens the sky instead. Marshadow, who was observing this, forces Cross away from the wing and grabs it. Cross orders Lycanroc to attack, but Marshadow corrupts it and has it and the other wild Pokémon present to attack. Lycanroc nearly kills Cross, but Charizard takes the hit, surprising him. Cross then helps by keeping Lycanroc busy while Ash got to the Rainbow Wing. He succeeds in bringing it back to its senses by reminding it of the day they met, and then they helped the others battle the other controlled Pokémon.

After Cross watched as Ash challenged Ho-Oh to a battle, Cross promised to challenge Ash to another battle after he got stronger, and told Ash not to lose again until that day comes. He was last seen in the ending credits, sharing a meal with Lycanroc and Incineroar around a campfire.

He is a boy that believes strength is everything and aims to become the ultimate Trainer. He abandoned his Charmander when he deemed it too weak and wouldn't listen when Ash told him that Pokémon and trainer have to work together to become strong. After being beaten by Ash and seeing him fight Ho-Oh, however, he seems to have abandoned his obsession with strength and became friendlier. 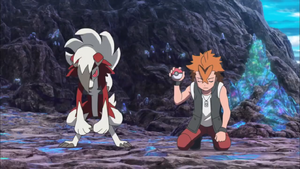 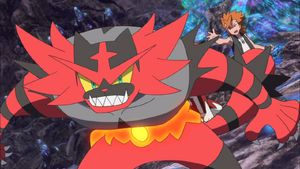