NOTE: This article is about the incarnation of Crossbones from the Marvel Cinematic film series. The mainstream version can be found here: Crossbones.

Variants of him also appear in the Marvel animated anthology series What If...?, serving as a minor antagonist in "What If... The World Lost Its Mightiest Heroes?" and a supporting character in "What If... Thor Were an Only Child?".

He is an agent of HYDRA who initially posed as the leader of S.H.I.E.L.D.'s counter terrorism team known as STRIKE, and an enemy of Captain America and the Avengers.

He was portrayed by Frank Grillo.

Brock first appears as an agent of S.H.I.E.L.D. who was tasked as the commander of STRIKE and would often work alongside Captain America and Black Widow along with his subordinates. During his career, however, he became a HYDRA agent and sought to create a fascist new world order under HYDRA's rule.

During one of his missions, Brock and his STRIKE team had to deal with a known terrorist leader by the name of Baker who had stolen a weapon called Zodiac. Brock and his team dealt with Baker's men while Rogers and Romanoff went to deal with Baker himself. At the end of the operation, the zodiac was recovered and Baker got away after his men took the fall.

One night, a mobile S.H.I.E.L.D. launch platform known as the Lemurian Star was hijacked and taken over by a terrorist named Georges Batroc and a group of 25 other mercenaries backing him up. Brock and his team were quickly deployed to deal with the situation and retake the ship. After a mission debrief, the team parachutes onto the ship and slowly retakes the facility room by room until the entire place is under S.H.I.E.L.D. control once more.

Brock had accompanied his team to the hospital after Director Nick Fury was shot and apparently killed by an unknown assassin. He appeared to apologize to Steve Rogers for the loss of his known commander, but then leaves after he is called back to the Triskelion for a debrief with Alexander Pierce. Rumlow was delayed by Rogers and Natasha but said it was urgent and left in a hurry with his team.

When being called back, Pierce had declared Captain America an enemy of SHIELD as he had key information about Fury that could jeopardize HYDRA's secrets and had to be dealt with immediately. Inside an elevator, Brock and his team entered into the same elevator with Rogers and attempted to capture him to maintain HYDRA and their plans. At first, the conversation between everyone was calm but it quickly spiraled into a fight and Brock was soon the only one left standing against Captain America who threw him against the elevator wall and fled.

Afterwards, Brock gathered his STRIKE team members and they all organized a manhunt for Captain America and Black Widow in an attempt to prevent Project Insight from being compromised. They were able to track the two of them into a mall in Washington D.C. but they couldn't find them after a long search.

Later on, Steve Rogers and Natasha Romanoff were discovered at Camp Lehigh where Arnim Zola was there on his computerized brain distracting the two, Alexander Pierce ordered a missile strike and had the camp destroyed. Soon afterwards, Brock and his STRIKE team were deployed to confirm if the two of them were killed at the ruins of the camp. He eventually discovered their footprints and confirmed that they were alive and so he had to call in the Winter Soldier, the most elite assassin and agent of HYDRA. Brock would remain inactive until the end of a battle between the Winter Soldier with his HYDRA team and Captain America with Black Widow and Falcon.

After the battle, Brock ran into the event with his STRIKE team and successfully captured all three of them. After the three of them had surrendered, he had noticed his subordinate, Jack Rollins, attempting to execute Captain America, but called it off to prevent media attention and told him to wait until they were cleared of media interference. Eventually, when the coast was clear, he ordered three graves dug, but the three of them had escaped and he eventually went back to a secret HYDRA base where the Winter Soldier was seen being managed. He then watched as Bucky mentioned that he knew Rogers and Pierce ordered his memories wiped so he could defeat Captain America.

Battle at the Triskelion

Meanwhile back at the Triskelion, Rumlow appeared and held Cameron Klein at gunpoint which caused agent Sharon Carter to do the same to Brock. He supposedly surrendered but really pulled out a knife and stabbed her hand and soon a gunfight between S.H.I.E.L.D. and HYDRA agents broke out while Rumlow accessed the computers to launch Project Insight Helicarriers. He succeeded and soon the Helicarriers were bought into the air and he escaped while HYDRA sleeper agents launch an attack on S.H.I.E.L.D. and brought down the agency. On his way through the Triskelion, Rumlow ran into several S.H.I.E.L.D. agents and killed them by both stabbing and gunning them down with their weapons when he got a call.

He received a call where he was informed that Alexander Pierce was captured by Captain America, Black Widow, and Falcon and that he had to rescue him to prevent HYDRA's plans from being compromised. As he went to save Pierce, he was attacked by Falcon and engaged in a fight with him. Rumlow was superior to Falcon and bragged about how he's gonna hurt as HYDRA doesn't take prisoners and they continued fighting until a crashing Helicarrier came through the building and rubble and debris fell on Rumlow crushing him. He survived, but had received heavy amounts of scars and his whole body was burnt and was eventually carried away to another facility.

Months later, he had watched the news and saw the news reports of S.H.I.E.L.D.'s downfall and was furious of seeing HYDRA's defeat as they had all the resources needed to win. In an attempt to get HYDRA's attention, he assaulted the nurses and hospital staff and eventually a team of HYDRA agents stormed in. Before their commander finished his sentence and the Hail HYDRA motto, Rumlow shot him and killed everyone in the room sending a message to HYDRA that he no longer works for them and defected afterwards. He then sought to get revenge against all those who scarred him and wanted to make them suffer the same pain he did and became a mercenary under the name of Crossbones.

Wanting to lure out Captain America and the Avengers, Crossbones had organized a team of mercenaries (known as Hero Mercs) and they all planned to attack the Institute for Infectious Diseases laboratory in Lagos, Nigeria and acquire a biological weapon. Crossbones and his men broke through the facility in trucks and stormed out and into the facility. Poisonous gas was then released into the facility but Captain America and the Avengers soon arrived to deal with Crossbones and his men quickly after the attack began.

Crossbones eventually ran into Black Widow once more and attacked her out of revenge. She attempted to stun him, but he stated that he didn't feel pain anymore and punched her and threw her into an armored truck with two other mercenaries and throwing in a grenade before closing the truck's top. Natasha barely escaped the truck while using one of the mercenaries as a human shield and Crossbones got the weapon he needed and then escaped with the remaining members of his mercenary team. They eventually ran into a local market where his men split up to keep the weapon and Crossbones fought Captain America in order to get revenge for brutally scarring him from back during the HYDRA Uprising. The two of them fought but Steve Rogers had won in the end and cornered Rumlow.

After their fight, Captain America demanded Crossbones reveal who he was working for. He claimed that the Winter Soldier was pulling all of the strings before detonating his bomb vest in a last-ditch attempt to kill Captain America, but Scarlet Witch contained the blast and threw him up into the air where he blew up in front of a building, causing the deaths of 26 aid workers from Wakanda. In the aftermath of the attack, the United Nations gathered and formed the Sokovia Accords to regulate the Avengers and other superheroes in hopes of preventing another Lagos-like attack. The accords would go on to tear the Avengers apart and leave them disbanded with Captain America now a criminal.

Five years after the death of half the living beings in the universe, the remaining Avengers and Guardians concoct a plan to go back to the past and collect the Infinity Stones from different points in time and use them to reverse Thanos' actions; Captain America, Iron Man, Ant-Man and Hulk going back in time to the Battle of New York to retrieve the Space Stone, Mind Stone, and Time Stone. While the 2012 Avengers apprehend Loki, future Captain America, Iron Man and Ant-Man witness Rumlow, Jasper Sitwell and the rest of STRIKE arriving to collect the Loki's scepter (which contains the Mind Stone); the former two noting to Ant-Man that all of them are really affiliated with HYDRA, though they weren't aware of that at the time.

Rumlow and the others quickly take the scepter from the Avengers and prepare to take in back into S.H.I.E.L.D. custody, actually planning to deliver the scepter to Doctor List so he can study it. However, just as they are about to exit Avengers Tower, Captain America joins them in the elevator, claiming that there has been a change of plans and that he is now going to take the scepter back to S.H.I.E.L.D.. Sitwell and the rest of STRIKE are immediately unnerved of Captain America's claims and presence, Rumlow notably reaching for his gun in response, though the former dissuades their suspicion by whispering "Hail Hydra" to them, allowing him to take the scepter and Mind Stone without question. Given that Pierce didn't order Captain America to retrieve the scepter and that Captain America wasn't affiliated to HYDRA after all, it's possible that Rumlow and his whole STRIKE unit were severely punished for falling into Rogers' deception. 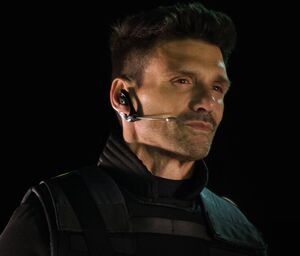 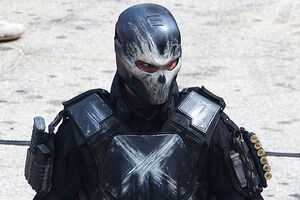 Frank Grillo as Crossbones on the set of Civil War. 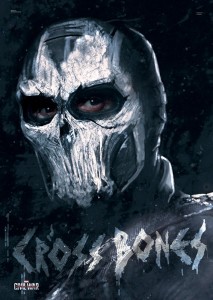 Crossbones during the attack.

Crossbones ready to fight with Steve Rogers in Lagos.

Crossbones reveals his identity to Steve.

Crossbones killing himself in a failed suicide bombing.

Scarlett Witch using a Shield to contain the explosion. 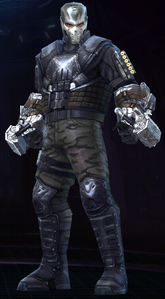 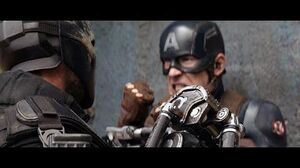