In the opening sequence, Rumlow leads SHIELD's STRIKE team on a mission to aid Captain America and Black Widow in capturing Batroc the Leaper. Later, when Captain America refuses to share information regarding Nick Fury's "death" to Alexander Pierce, Rumlow and his team are sent to subdue Captain America in an elevator.

However, the hero manages to get away, and throughout the rest of the movie, Rumlow and his team attempt to kill Captain America so that he cannot interfere with Pierce's scheme to kill millions of people with a fleet of Helicarriers. It is later revealed that Rumlow and Pierce are double agents working for the terrorist cell HYDRA. After Captain America reveals that SHIELD was compromised by HYDRA, Rumlow and his team are dispatched to launch Project Insight. At the climax of the film, Rumlow nearly kills Sharon Carter (Agent 13), before facing off with Sam Wilson, an ally of Captain America known as the Falcon. And although he defeats Wilson, Rumlow is severely burned when one of the hellicarriers crash onto the Triskelion. Rumlow is last seen taken to a hospital for medical attention.

The Avengers, led by Captain America, have been tracking Rumlow down for six months prior to the film's release. They eventually get a lead on the villain in Lagos, Nigeria. They are surprised when Crossbones' mercenaries storm an infectious disease center to steal a chemical bioweapon, as they expected him to target a local police station. After successfully obtaining the virus, Crossbones and his men flee from the facility. Knowing that they cannot outrun the Avengers, they abandon the truck in an African slum before splitting up. Crossbones then ambushes Captain America, and the two engage in an intense fight. After being disarmed and defeated, Crossbones removes his helmet to reveal his scarred face. Rumlow then goads Rogers into dropping his guard by referring to Bucky. Once Rogers was distracted, Rumlow detonates an explosives vest, hoping to take the captain down with him. However, Scarlet Witch uses her powers to temporarily contain the blast, and attempts to levitate Rumlow into the sky and away from civilians. But she loses control of her powers and the bomb detonates next to a building, causing it to collapse and kill several people. 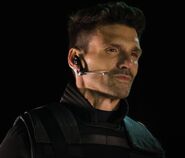 Frank Grillo as Crossbones on the set of Civil War

Retrieved from "https://villains.fandom.com/wiki/Crossbones_(Marvel_Cinematic_Universe)?oldid=1427042"
Community content is available under CC-BY-SA unless otherwise noted.